No Solitude in an MMO, Part 1

I still remember when I first went to Kamio, a highsec ice mining system next door to Halaima. The Kamio miners claimed that they would not submit, because they were different: "This isn't Halaima, this is Kamio!" They didn't believe me when I told them that all highsec miners were the same everywhere. But it was true. 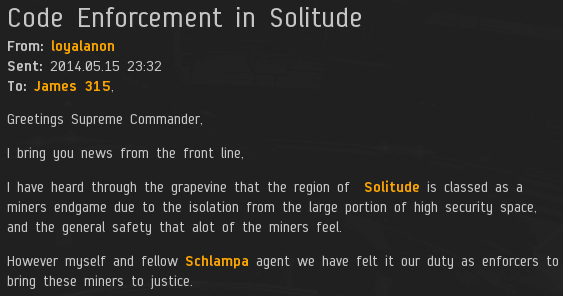 The Solitude region contains what are known as "highsec islands", systems with 0.5+ security cut off from the rest of highsec by low/null systems. Miners there think of themselves as a superior breed. Incredibly, there are players who think mining in highsec is EVE's "endgame".

Island or not, every system with 0.5 and above security is a highsec system. Which makes them a part of New Order territory. They are all subject to the Code. 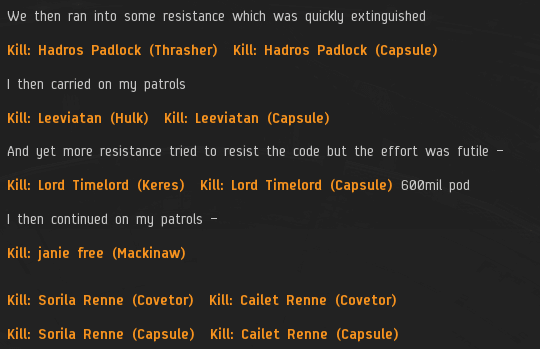 A New Order patrol entered this "endgame" area and quickly dispatched the bot-aspirants. The complacent miners were completely taken by surprise.

The miners of the Solitude region couldn't believe that they weren't 100% safe. They thought they had earned immunity from the Code just by jumping through a few non-highsec systems. 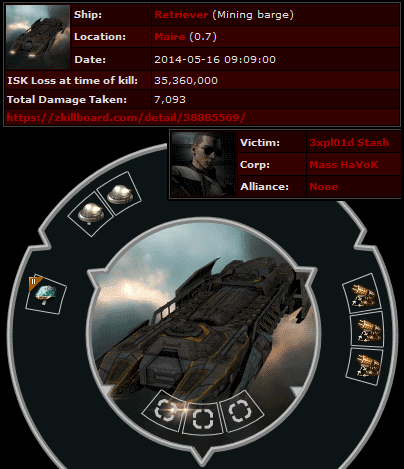 Among those whose endgame came crashing to a halt was 3xpl01d Stash. As his untanked Retriever proved, miners are the same everywhere in highsec.

Stash was furious. He declared himself a "newcomer" to EVE. If you've read MinerBumping before, you should know the drill; we always investigate claims of newbie status. Stash was, in fact, a 10 month-old character. To his credit, Stash's presence in the highsec island proved he'd at least jumped out of highsec in his 10-month career. That's more than many miners twice his age can say.

Despite his 10 months, Stash was strapped for cash. With his Retriever gone, he was at the end of his rope. Our Agents immediately made good the loss by giving him something even more valuable:

...they introduced Stash to the Code. Now he had the means to acquire riches beyond his wildest dreams.

However, even the Code is of no use to someone who's unwilling to read it. Stash continued to compound his violations of the Code. He was dangerously close to earning a spot on the Red Pen list.

Though Solitude hadn't felt the pleasure of Code enforcement as frequently as other highsec areas, the miners there seemed to be very familiar with the New Order. Stash was the exception. Paradoxically, it is the ignorant miners--the ones with the greatest need to listen--who speak the most.

Stash wouldn't stop raging in local. He threatened to quit. This was Stash's first real encounter with other players in EVE, so it wasn't a great sign. But the New Order isn't accustomed to giving up. Our Agents love to take risks. They're always prepared to gamble on a long-shot. They believed they could save this miner.