The Demise of the Free Miners

We've seen time and again the futility of resistance to the New Order and its Code. Countless anti-Order resistance movements have sprouted like weeds, only to wither away. 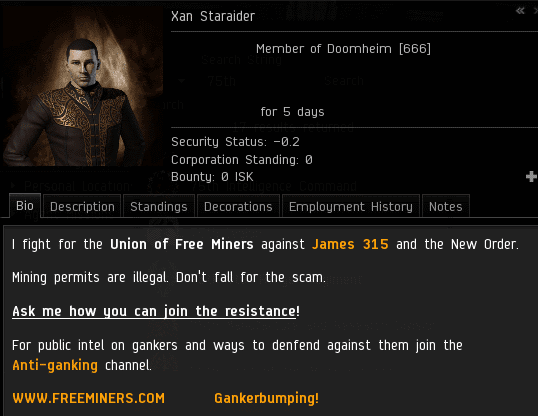 One of the new crop of rebels was a fellow named Xan Staraider, founder of the "Union of Free Miners". His particular angle was to encourage miners to become "white knights", disrupting ganks and hunting the gankers. 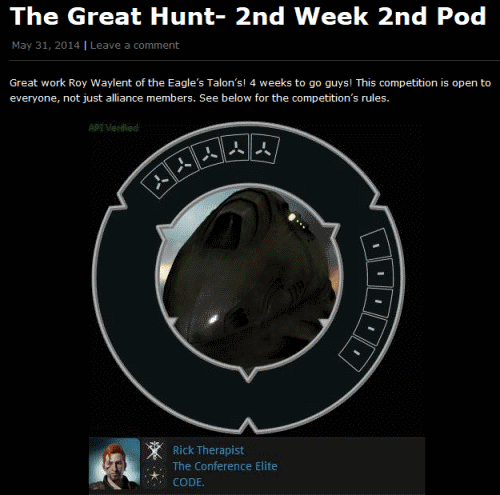 As many rebels do, Xan added to the clutter of the internet by creating his own blog. Xan called the carebears of highsec to arms, offering a six-week contest for white knights to pop New Order pods. By the end of the second week, the rebel army had destroyed a grand total of two pods. Both were empty. Xan celebrated the victory.

Then came the "The Battle For Aufay":


The New Order and their monkeys have once again laid siege to another system of HighSec, and again they are attacking freighters. This time however our regional fleet was already in place before their attack started and the regional commander had the foresight to set up warning beacons at the gates entering the system.

The White Knights were better prepared this time as well. The Eagle’s Talons are grabbing them by the nose, while the other anti-gankers, minions, bush ninjas, and solo-White Knights are kicking them in the ass.

A lot of New Order pods have been exploding in Aufay.

Xan breathlessly reported the daring deeds of the white knights. Multiple anti-Order resistance movements rallied together to stop the slaughter of freighters in the Aufay system. (In the next Kills of the Week post, we'll see how they fared.) Judging by the blog post, the rebels had won the Battle of Aufay. Xan concluded his battle report by claiming that "a lot" of New Order pods were destroyed. 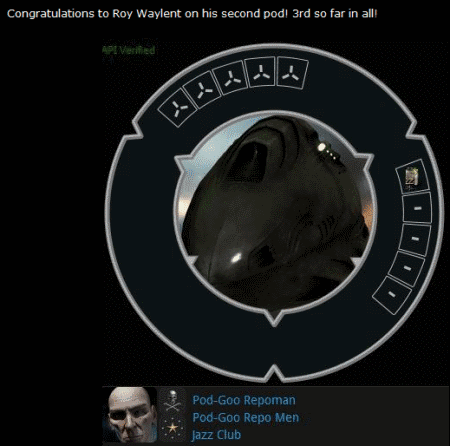 ...Which turned out to be one more pod. This time, the pod wasn't empty; it contained a 1.5 million isk implant. Things were escalating. For nearly two years we've been told that the carebears of highsec would "eventually" stand up to us. At long last, was this the end of the New Order?

No, it was the end of the Union of Free Miners. Let's see where this resistance movement went wrong. 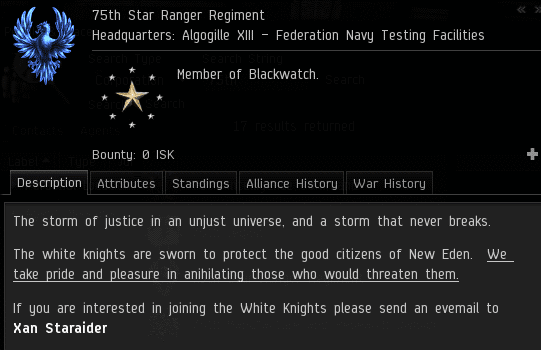 Xan was originally a member of the 75th Star Ranger Regiment corp, one of the few members of the Blackwatch. alliance. This opened his army of white knights to the threat of wardecs. 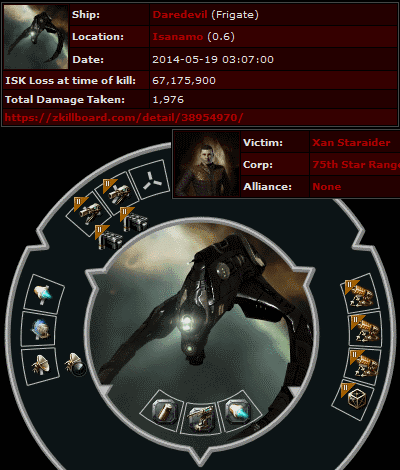 Amused by the rebel, some of our Agents decided to wardec him. Seen here, one of Xan's Daredevils. 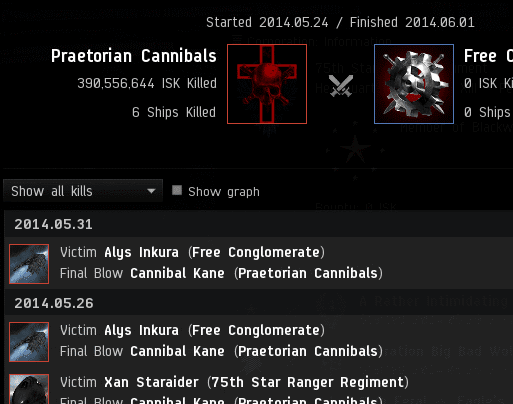 More than one corp took an interest in Xan and his rebels' alliance. Among the Code enforcers was the notorious Cannibal Kane, who made short work of the uppity carebears. 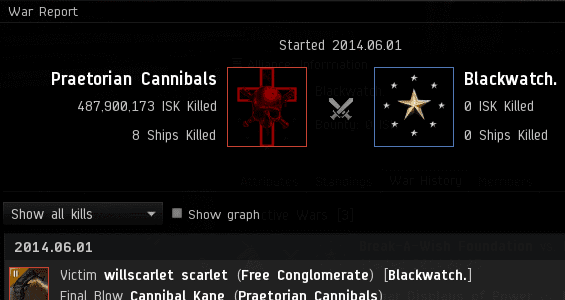 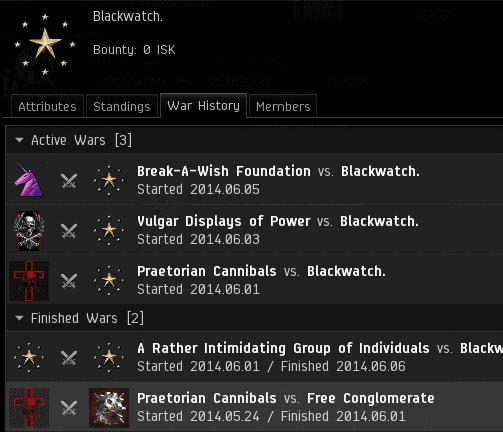 Wardecs continued to pour in against the Blackwatchdot alliance corps. It was too much for them. Meanwhile, the success of the anti-Free Miner wardecs was paralleled by more anti-rebel wardecs from other good citizens of highsec. 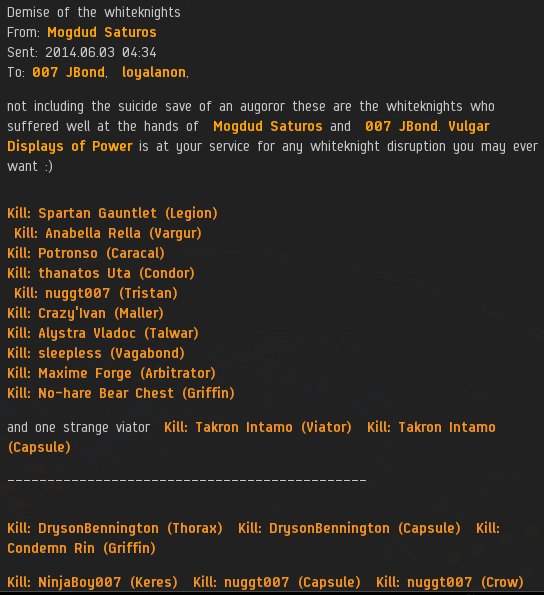 By gathering together in the Aufay system, the rebels were efficiently identified and wardecced. As seen in the EVEmail above, the rebels were also slaughtered. Some of them used cheap anti-gank ships, but others made the mistake of using expensive PvP ships, operating under the assumption that they could safely attach themselves to a bunch of CONCORD killmails. Instead, they got their corps and alliances wardecced and lost everything. 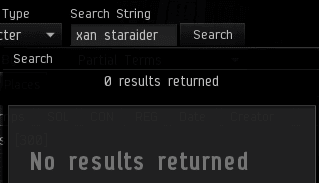 After the rebel defeat at Aufay, the Xan Staraider character was biomassed and his Union of Free Miners was disbanded. Xan explained his decision to quit EVE as follows:


Wow, I am truly amazed at how quickly things can fall apart. As some of you may know the white knights have been dealing with perpetual wardecs from the New Order’s mercs. After going out of town for a couple days my son decided that the best way to get dad to stop chasing pirates was to delete my guys. Needless to say it worked. And yes I have changed my password now. I petitioned CCP to resurrect my guy but I fear it is too late. The alliance that we had worked so hard to create had fallen apart over-night.

I talked to Max last night and after a heated exchange he made it clear that he is not giving me back control of Blackwatch. He has turned the alliance from white knight bad-asses, to bounty hunters.

He expressed outrage at having been wardec’d constantly for 2 months and having very little to show for it. The total cost of the war was over 6 billion in ISK, and a third of his team. It is very hard to get out and stop gankers when mercs are trying to shoot at you. He was equally outraged that other people in the Anti-Ganking community could not do more to help.

Personally I don’t know who else there was and what else they could do. Most people have the burning hatred for CODE, so if anything could have been done, it was done. I also understand Max’s frustration, the second time Kane wardecd the Star Rangers, all my co-workers just stopped playing.

So this is it for me. My alt has a 1v1 duel with Capt Starfox tonight in low sec and I have 2 more people I need to send ISK to in order to make amends. Then I’m done. I’m switching to Star Trek Online. I wish the Anti-gankers the best of luck. I hope you keep fighting.

Xan's story about his son biomassing his characters (as opposed to the more common phenomenon of carebears rage-quitting without the assistance of their progeny) may or may not be true. If his son really did annihilate Xan and his alts, then perhaps he qualifies as an honorary Agent of the New Order. Lest we feel sympathy for Xan's plight, let us not forget that he violated the EULA by account sharing. It's appropriate that this happened at the time of the Kronos expansion, since in Greek mythology Kronos overthrew his father, and was later overthrown by his own son.

In any event, the demise of the Union of Free Miners was inevitable. It happens to every anti-Order organization. At their core, the carebears just want to be AFK, face no challenges whatsoever, and to play a single-player game. Those aren't exactly ingredients for a successful team. Also, they lack the Code. Big mistake on their part.
Posted by MinerBumping at 19:18