They say a carebear's pod is like a box of chocolates: You never know what you're gonna get. The same is true of a carebear's mining barge. 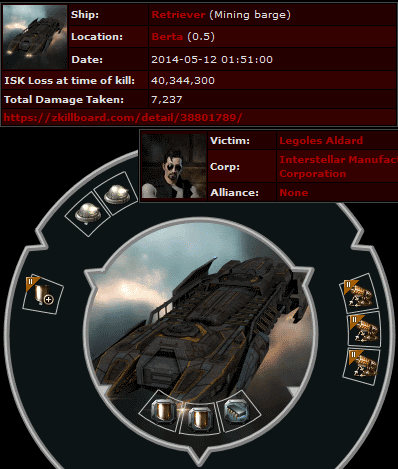 Don't misunderstand me. Of course you know that you're going to get a fail-fit. What you don't know is what the immediate results of the gank will be. Legoles Aldard, whose fail-fit Retriever was dutifully ganked by Agents Krominal and Keraina Talie-Kuo, provides us with today's example. 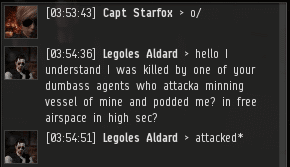 Legoles was extremely upset about the loss of his precious Retriever and he needed someone to talk to. He was referred to New Order diplomat Capt Starfox. Our Knights kill countless trillions of isk worth of carebears; it's the diplomat's job to sort everything out. 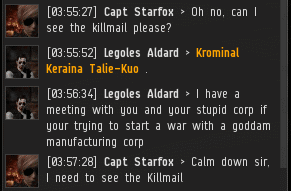 The situation was tense from the very beginning. If the matter wasn't handled delicately, it could mean all-out war between the New Order and a "manufacturing corp". No one wanted that. 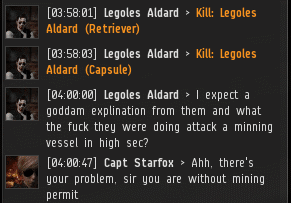 Legoles couldn't believe that someone would actually attack a mining vessel in highsec. It was incomprehensible to him. As luck would have it, Starfox had a lot of familiarity with such things. Indeed, he had seen many mining vessels attacked in highsec. He identified the problem straightaway. 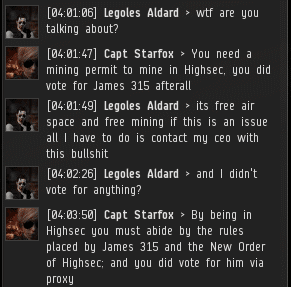 Starfox enjoyed the experience of sharing the Code with yet another clueless highsec miner. For someone who so desperately needed guidance, Legoles was surprisingly unreceptive. He believed in the carebear myth about free "air space". He also had a lot of faith in the CEO of his tiny manufacturing corp. 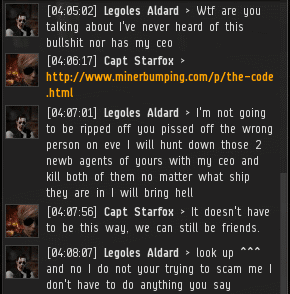 I'm always amazed by how quickly EVE players resort to making empty threats. Legoles, the same miner who couldn't fit a Retriever, thought Starfox of the mighty New Order would be afraid of him. And his CEO. 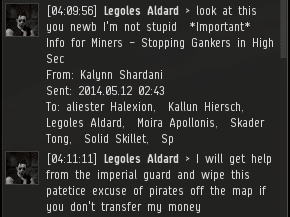 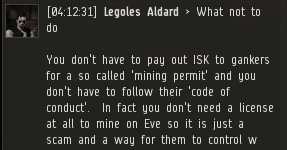 Then the other shoe dropped. Legoles was in possession of heretical material distributed by Kalynn Shardani, the "mining consultant". New Order Intelligence intercepted similar EVEmails earlier this year. Legoles' possession of the EVEmail, and his willingness to paste it into the convo window, proved that Legoles was already aware of the Code. Once again, if a miner claims he's never heard of the New Order, it's very likely he's lying. Everyone's heard of us. We're a huge deal. 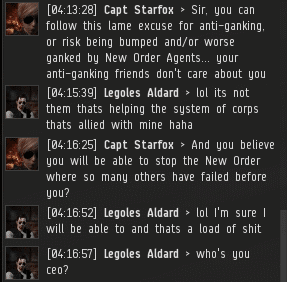 His heart racing and his typing fingers filled with adrenalin, Legoles felt powerful. He believed he could help destroy the New Order once and for all. Our gankers messed with the wrong miner this time. 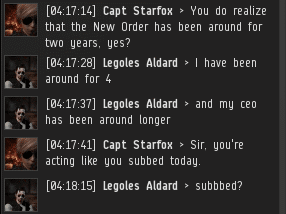 If he is to be believed, Legoles has spent four years slaving away in the highsec asteroid belts. He still doesn't know how to fit a Retriever, and until now he had no idea people gank mining vessels in highsec. 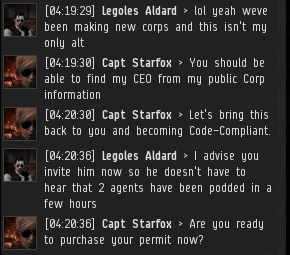 Despite his alleged four years in EVE, Legoles needed help finding the name of Starfox's corp's CEO. Starfox was happy to assist. 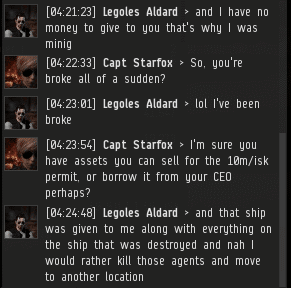 Legoles' plan to destroy the New Order ran into a roadblock when he realized that he had no money and no assets. At this point, you might wonder if he really has been "playing" EVE for four years. The truth is, it's impossible to know. I've met carebears who have played for years, and I've met carebears who have played for days. They're pretty much the same. Whether you're AFK for a day or AFK for a decade, you're not going to learn anything. Legoles learned more about EVE in the 30 minutes he spent talking with Starfox than he did in the rest of his career--no matter how long it was.
Posted by MinerBumping at 19:07