Miners sit around highsec all day, engaging in something that one would hardly call "gameplay". Yet they remain fixed in place, motivated if not entertained. It's as if they're waiting for something. 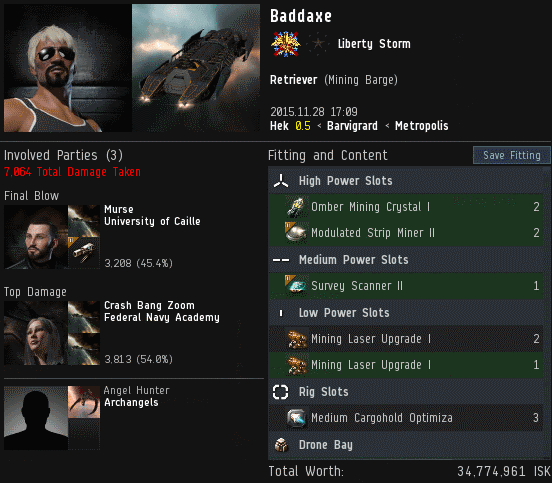 ...Waiting for the New Order to save them. Baddaxe's Retriever and 102 million isk pod were given some unplanned excitement in Hek.

Agent Crash Bang Zoom successfully made contact with the miner. Of course, there's a big difference between contacting a miner and truly reaching him.

Baddaxe began playing EVE over eight years ago. A lot has happened in that time, though apparently not much of it to Baddaxe's benefit. Still, he'd had most of a decade to accumulate resources. Now they would be devoted to the destruction of Agent Crash. 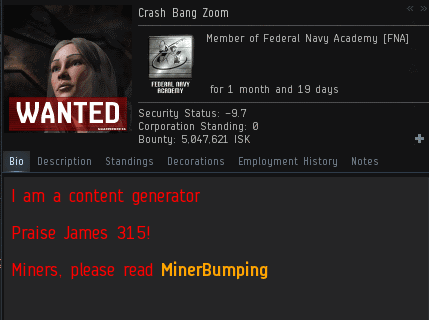 Judging by the size of the bounty he placed, these have been difficult years for Baddaxe.

More details surfaced. Baddaxe was "retired". People retire in games now. Either that, or Baddaxe was about to PLEX his 401(k) plan.

The situation became more serious when Baddaxe revealed that he was going to make a really bad career choice. Our Agent was concerned. She knew she might need to refer this matter to a senior Agent.

Although the New Order has the most effective and efficient bureaucracy in EVE, our Agents are trained to handle matters themselves whenever possible.

Baddaxe was out of control. Crash had followed protocol, but the miner wasn't calming down. Was he a Goofus? To be sure, Crash prepared to invoke the name of James 315. That usually shakes the Goofuses out of the trees.

If she offered a brutally honest assessment, Crash might say that Baddaxe was showing little promise. And yet...

Our Agent saw something in Baddaxe. Maybe the miner had potential.

Could it be? Would Baddaxe grow out of this childish, rebellious phase? Or was he about to descend even deeper into the abyss?