Previously, on MinerBumping... Admiral Foxbolt stepped onto the battlefield of EVE-O and made his case to the people in an "apology" thread. He was soon overwhelmed by the crowd and put on trial for his life in EVE. Not a single player was persuaded by his arguments or pacified by his apology. Foxbolt was on his own. One man dared to stand, alone, in defiance of the galaxy.

Nearly two hours had passed. Foxbolt continued to defend his actions, but the battle was taking its toll. His only solace was the secret knowledge that he possessed a trump card--a weapon he hoped he'd never need to use.

The hydra-headed forum community wouldn't be slain. After each heroic blow, Foxbolt wiped his brow only to find more attackers popping up. 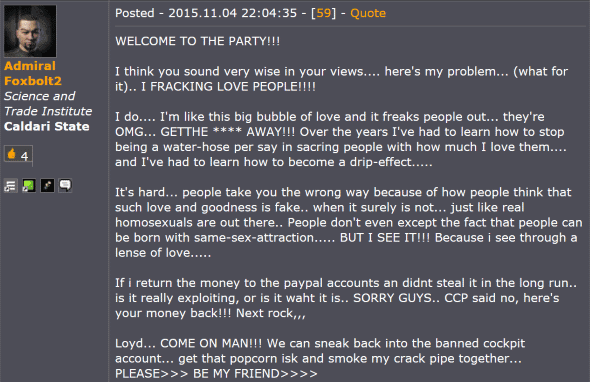 EVE-O was transfixed by the spectacle. Foxbolt's tank was buckling under the strain--and a total implosion couldn't be far off.

Fatigued, the forum warrior continued to fire off as many replies as he could. No matter how exhausted he was, Foxbolt knew he had to remain focused on his goal. He made every effort to avoid lashing out at his attackers. He didn't hate them. He knew they were all pawns of The Mittani.

Yet the EVE-O community showed no signs of letting up. Foxbolt's attackers were equally convinced of the righteousness of their own cause.

The thread was approaching the two-and-a-half-hour mark. Though he still hadn't won a single supporter, Foxbolt began to feel as though he was winning. The absence of anyone from the ISD or CCP was striking. Could it be that CCP Falcon had accepted his apology and was lifting his ban?

Foxbolt had hoped that if people weren't persuaded by his words, they would be convinced by his actions. No such luck. Cynicism prevailed.

Even a lion has his limits. Foxbolt's tank was disintegrating. He would enter hull soon.

But he wouldn't quit yet. Not while his thread was still open. The battle raged.

A hopeful sign: A neutral entered the thread for the first time, choosing to wait for more evidence before picking a side.

Against all expectations, Foxbolt was getting his second wind. Second winds aren't always pretty, though. 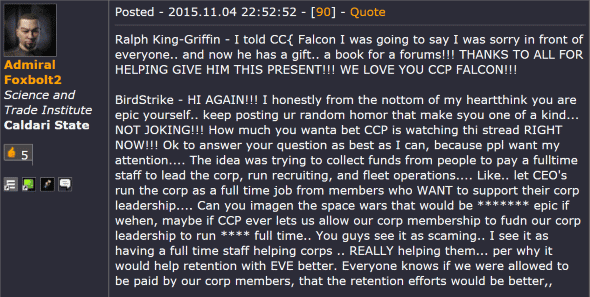 Nearly three hours had passed. Foxbolt still believed in his idea of being paid real-life money by his corp members, and everyone else was still against him. After all of the chaos and tumult, had nothing been accomplished?

A new element was introduced. Before Foxbolt could develop his ideas further...

CLANG. The ISD finally showed up and shut Foxbolt down. His invaluable line of communication to the EVE community was severed. It was settled, then. Foxbolt would need to play his final card, his ace in the hole. Would it succeed? Would Foxbolt's permaban be lifted, and would he get CCP's blessing for his mission to serve as a quasi-official community sheriff? Or would Foxbolt's secret weapon turn out to be useless, causing him simply to flame out one last time?