People are getting bullish on New Order stock these days. You'll see what I mean in a moment.

Wardog Squadron, home of HotShotX Warcastle, increased its holdings with a purchase of an additional 1,200 shares. What better way to celebrate a hard-won elite PvP victory than earning a Supreme Protector's Tip of the Hat™? This purchase sent us over the 780 billion isk mark. 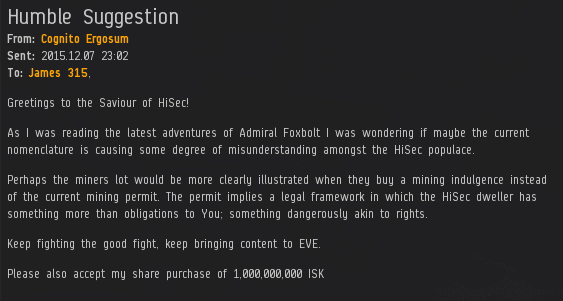 Zoe Worclaw has her priorities in order--or should I say, in the New Order? No one should leave the game without a plan to put their money to work. We'll make good use of it. Zoe transferred her isk to purchase 500 shares, earning her a Supreme Protector's Tip of the Hat™ for sending us over the 782 billion isk mark.

You see what I was saying about investors getting bullish on stock this week? Maybe they know something you don't? Better buy some shares, just in case. In EVE, one can never be too careful.
Posted by MinerBumping at 18:43