Ethicists have long debated the nature of a corporation's moral responsibilities. People, certainly, must be bound by morality. What about artificial entities? Some say that a corporation's only obligation is to increase the wealth of its shareholders. Others propose the concept of corporate citizens, responsible to the communities that make their existence possible.

The more I think about it, and the more money I get from people buying shares in the New Order, the more I find myself leaning toward the idea that corporations themselves have an obligation to obey and glorify the Code. Obviously, individual highsec residents should follow the Code. Perhaps it's time for more corporations to do their part. After all, without the Code, there probably wouldn't be an EVE today. Not one worth playing, anyway.

If you're a new player looking to join a highsec corp in this post-awox world, how do you know if a corporation is right for you? 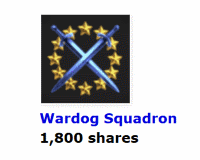 Seeing something like the above on our Shareholders page can't hurt.

Late last month, Wardog Squadron, home of Kills of the Week regular HotShotX Warcastle, purchased 1,500 additional shares and earned a Double Supreme Protector's Tip of the Hat™ for sending us over the 775 and 776 billion isk marks. 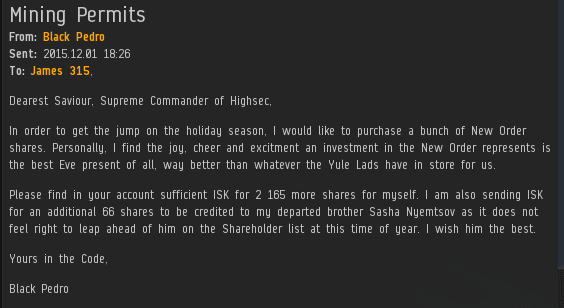 As December dawned, Black Pedro found himself moved by the holiday spirit. He made some really great points about the nature of New Order share purchases: When you buy our stock, you get back even more than you give. And in keeping with said holiday spirit, Pedro even thought to look after a famous Agent who has left EVE. What a guy. Black Pedro's purchase of 2,165 additional shares earned him a Double Supreme Protector's Tip of the Hat™ for sending us over the 777 and 778 billion isk marks. 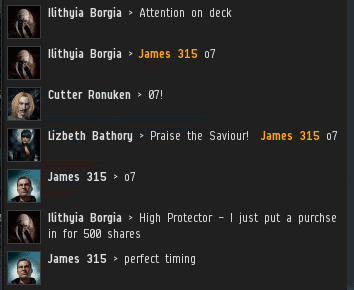 Elite PvP'er Ilithyia Borgia knows better than most that in EVE, having good timing is invaluable. She picked the perfect time to buy more shares. When's the right time to buy more New Order shares, you ask? Now.

Ilithyia's purchase of 500 additional shares closes our shareholder update out with one more Supreme Protector's Tip of the Hat™. We've reached the 779 billion isk mark. You know, it just occurred to me that we're drawing near the 4/5 trillion mark. And after that... a trillion? Keep a close eye on this.
Posted by MinerBumping at 17:03