After losing her billion isk pod, Rhamnousia Nemesis swore an oath of undying hatred for Agent Alt 00. As a Metropolis region superhero, Alt 00 was fully justified in bringing the evildoer to justice. Rhamnousia declared her intention to drive the Agent from EVE forever. So much for player retention! 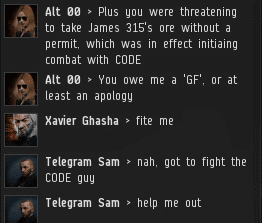 Life goes on. Rhamnousia retreated to the shadows to plot and scheme against the New Order. Meanwhile, other rebel miners were emboldened by Rhamnousia's threats of force. 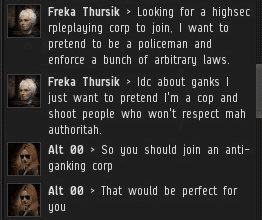 New Order Agents are not merely the military leaders of highsec; they also constitute highsec's civil authority. When an Agent is in system, they automatically take on a role similar to that of a respected tribal elder. 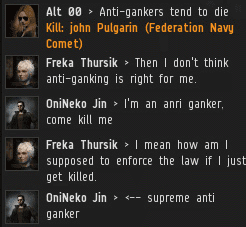 Freka Thursik inquired about different career paths in EVE. Alt 00 put on her guidance counselor and EVE historian hats, and began teaching Freka about the game. 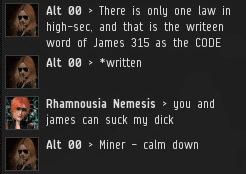 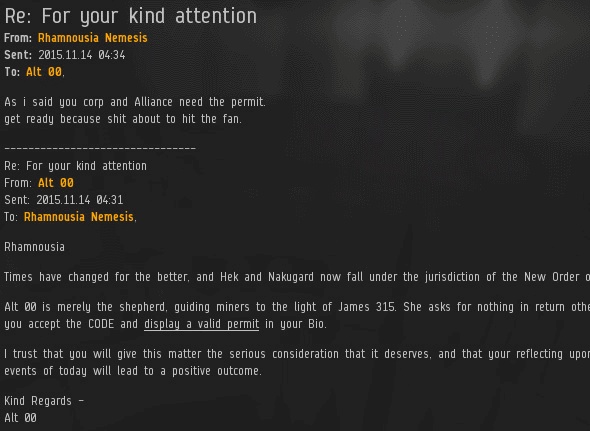 Hours had passed since the last Rhamnousia sighting. The time for plotting and scheming was over. Things were about to heat up in Metropolis. 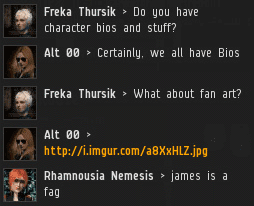 Though Rhamnousia posed an imminent threat to highsec, Alt 00 couldn't let the terrorist win by disrupting her other activities. Alt 00 continued to advise Freka, even taking the time to direct her to some tasteful James 315 fan art. 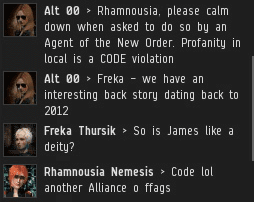 Alt 00's arch-nemesis struck again by lashing out in local chat. But... was that all there was to Rhamnousia's plan? 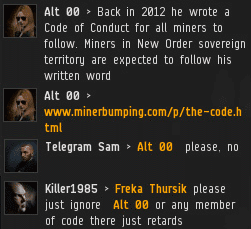 Once again, other rebels drew strength from their new resistance leader. A storm was gathering. 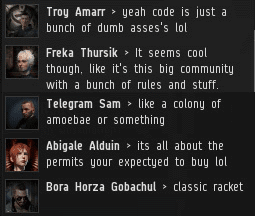 Carebears rallied, hoping to prevent any pro-Code ideas from taking hold in the system.

Alt 00 went to high alert. Was Rhamnousia about to launch her long-awaited counter-strike, with the aid of her new allies? Or had she already completed her plan to say "fag" a few times and leave the system?