What's your EVE legacy? How will you be remembered? Nullsec grunts and line members struggle to add a unique contribution to their empire. If you're a highsec carebear, the answer to the question is easy: You won't be remembered--unless your antics were highlighted here on MinerBumping. For Agents of the New Order, it's also an easy question. Theirs will be the greatest glory in all EVE. 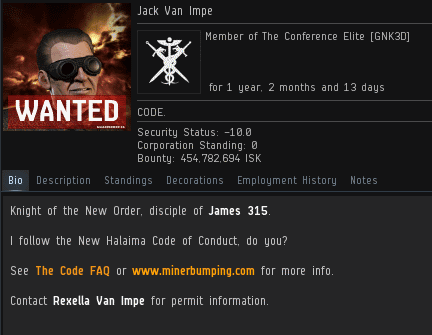 Agent Jack Van Impe found fame and glory in the enforcement of the Code. No matter where he goes in highsec, people know him and what he stands for. By contrast, the miners he ganks are relatively anonymous. Today, let's look behind the tearmails and gain a better understanding of the miners whose burning hulls light up Jack's legacy.

One of the most common complaints we get from miners is that they weren't given sufficient warning or explanation of the Code. Considering how miners react when they are informed of the Code, it's hard to give much weight to the complaint. 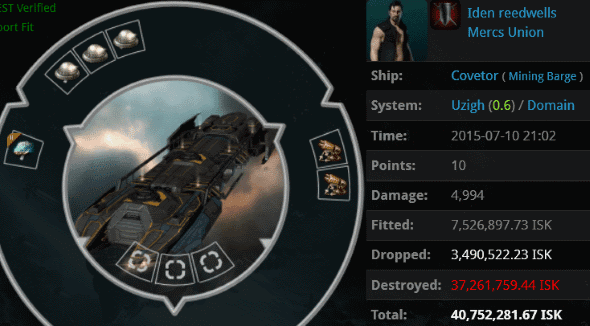 What inspires someone like Iden reedwell to make an (in-game) threat like the one above? He lost a 41 million isk Covetor. Miners get cranky when they're forced to interact with the game too much.

Jack ganked Ronin Tonnonchy's rookie ship and empty pod. This was enough to motivate Ronin to declare a foreverwar. This seemed incredible to Jack, so he asked the carebear to confirm that he was serious about his empty threat. 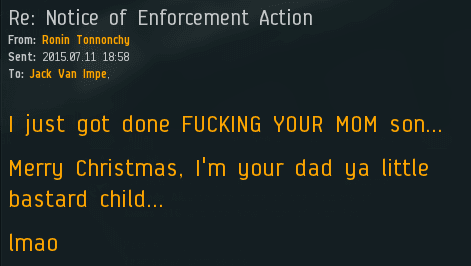 Fun fact: This was how "The Empire Strikes Back" originally ended, but someone persuaded George Lucas to change it. 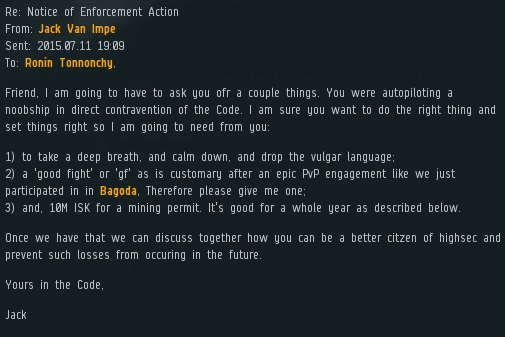 As seen here, Jack attempted to raise the level of discourse. If you've ever doubted the importance of the New Order, consider that if it weren't for our Agents, highsec would be filled with nothing but people like Ronin Tonnonchy. 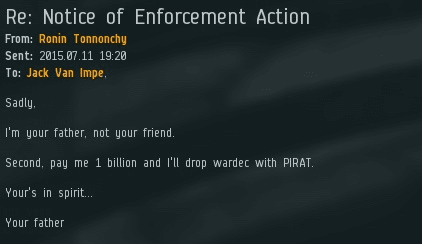 I guess the apple fell far from the tree this time. 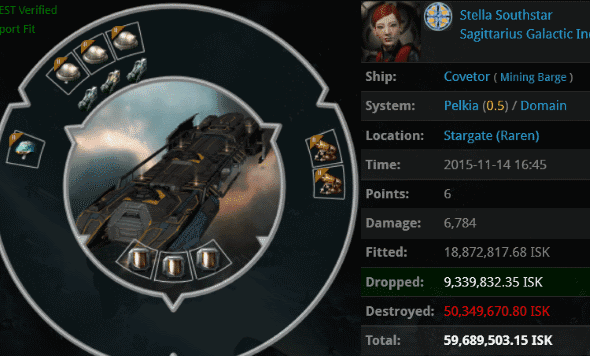 For our final round, keep in mind that Stella Southstar's sole inspiration was the loss of her precious 60 million isk Covetor.

If it ended here, no big deal. This EVEmail is about 60 million isk worth of effort for a carebear who isn't used to making more than a few mouse-clicks per hour.

Rebel miners aren't known for their foresight. If they had any, they would buy permits. Jack politely informed Stella of how their story would really end. Deprived of her false hope, Stella was ripe for a proper tearmail. 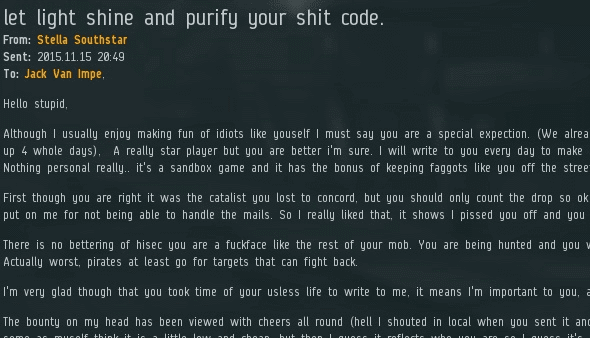 Click for full tearmail
This illustrates an important lesson about governing highsec. To rule the miners, you need to win their hearts and minds. That's difficult to do when the only thing you know about a miner is "fuck you". By engaging Stella in conversation, Jack was able to get a clearer picture of her needs, concerns, and ambitions. She didn't know it, but the former Covetor pilot was one step closer to getting a permit and obeying the Code.

With all due respect to Admiral Foxbolt, we don't need people to create corps for the purpose of enhancing human relations and player retention. The New Order's already got those things covered.
Posted by MinerBumping at 19:02