Agents of the New Order are tasked with governing highsec. Having total control over the residents of highsec--where the vast majority of EVE players live--may sound like an invitation to corruption. But our Agents are thoroughly vetted. Only those who embrace the Code are able to join our ranks, so the bad apples are easily weeded out. Nevertheless, the job requires our Agents to wear many hats. Some days it's a deerstalker that's called for. Agent Kalorned was about to have one of those days. From his journal:

"An otherwise slow day in December within the Derelik region, typical for the holiday season around this time, saw myself bumping the odd Procurer and Skiff away from mining range at the Gamis ice belt for lack of any gankable targets. After an hour or so a dreadful sight revealed itself: A bot-aspirant mining fleet of 4 Skiffs and 1 Orca piloted by a group of pilots with the last name "Darkspear" appeared and began mining. I had seen this gang before, and considering the light workload I had was now ready to begin advanced enforcement."

The previous day, our hero inspected each miner's bio in search of a permit: Ceramir Darkspear, Teramir Darkspear--you get the idea. None of these pilots were authorized to mine in highsec. On occasion, our Agents use wardecs to deal with the more heavily-tanked scofflaws. The Darkspear Initiative was a member of an alliance, so the entire Primal Ascendancy was about to be dragged into war. 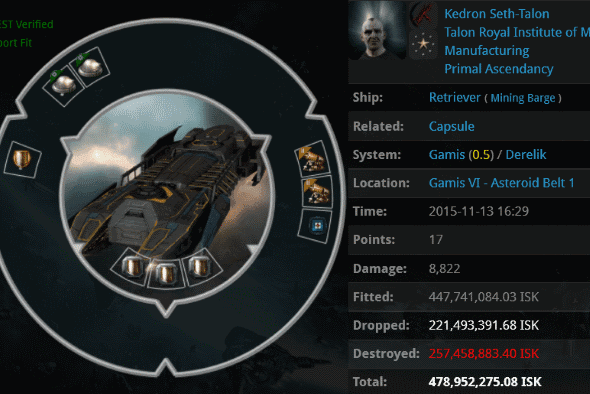 And Primal Ascendancy had learned to fear Kalorned. Only a month earlier, he'd ganked the better part of a billion isk of their ships and pods. As a result, Kalorned had made the acquaintance of the alliance's leader, Lord Connir. They'd spoken about the Code for a bit, but Lord Connir wasn't willing to enforce it on his entire membership. Now, thanks to the Darkspear family, Kalorned was ready to formally wardec Primal Ascendancy.

Less than 30 minutes after the wardec was filed--a day before it would become active--Lord Connir contacted Kalorned. He knew the New Order Agent was too powerful to defeat and too cunning to escape. There was no need for violence; the alliance was ready to surrender in advance. Kalorned requested 130 million isk to cover the cost of the wardec plus mining permits for each of the Darkspears.

130 million isk was a small price to pay. Lord Connir had always struck Kalorned as being more reasonable than most highsec alliance leaders. Even so, it's a little-known fact that many highsec CEOs and alliance leaders secretly cooperate with our Agents and help us deal with their more troublesome members.

But just as Lord Connir was about to pay the surrender fee, something unexpected occurred.

Lord Connir reported that each member of the Darkspear clan had a mining permit. Impossible! Kalorned had checked them the day before.

Each permit had been issued that very same day by an Agent Latir Darkspear. Kalorned's instincts told him something was up. Obviously, these miners had simply put fake permits in their bio after Lord Connir told them their actions were going to bring the New Order into a war with the alliance. 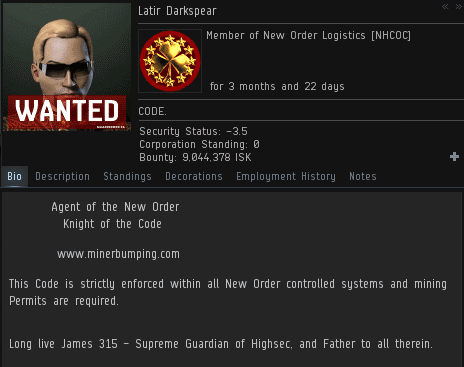 Plot twist! Kalorned learned that Latir Darkspear was, in fact, a member of CODE. and a self-proclaimed Agent. Surely this was some sort of trick? 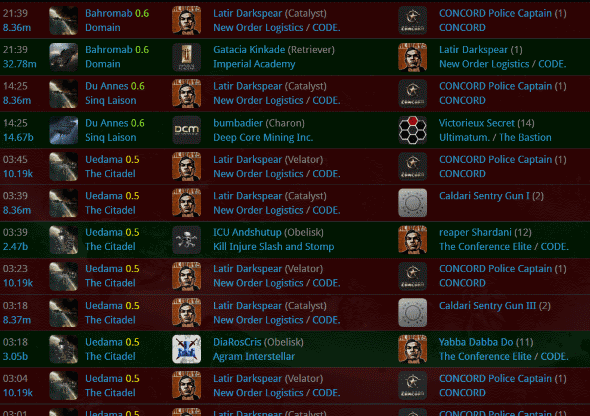 The deeper Kalorned's investigation went, the more amazed he became. Latir Darkspear was credited on numerous miner and freighter kills. His killboard showed over 57 billion isk worth of bot-aspirant destruction! Kalorned had a true enigma on his hands. With an alliance-level wardec hanging in the balance, the stakes couldn't be higher. To enforce the Code, Kalorned had no choice but to solve this mystery.