It's a bit of a cliché these days to say that ordinary people can be capable of doing extraordinary things. It's true, though. And it's especially true if you can imagine something so remarkable that it can bestow superpowers upon those who come into contact with it. 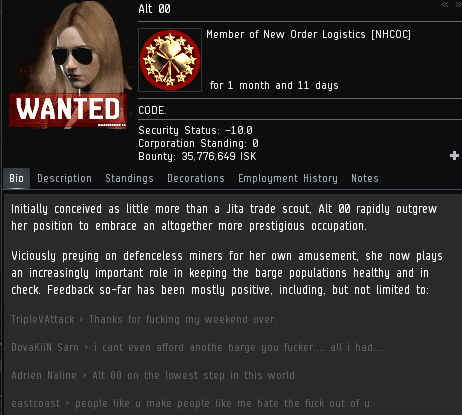 It's the Code, of course. An inconspicuous, mild-mannered trade alt encountered the Code. Soon, her life was transformed. She became a superhero, an Agent of the New Order. 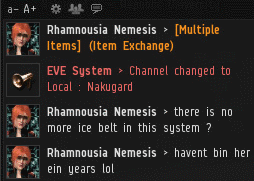 Our story begins in the Metropolis region. Local carebear Rhamnousia Nemesis peddled her petty wares in Hek, a major trade center. As she hopped into the neighboring Nakugard system, she was followed. Someone was watching over her like a guardian angel. 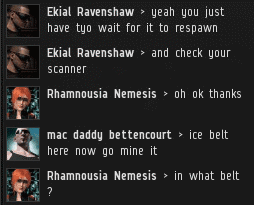 Years ago, ice fields in highsec provided the perfect environment for bot-aspirant miners. The years of infinite ice came to an abrupt conclusion: The New Order's public awareness campaign culminated in CCP's removing them from the game. Rhamnousia returned to EVE from that dark past, her greed undiminished by the passage of time. 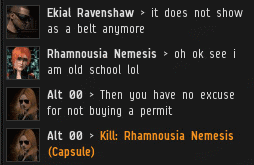 Rhamnousia went to the ice anomaly to scout it out in her naked pod. Suddenly, a superhero appeared, knocking out the villain and making a well-timed quip. 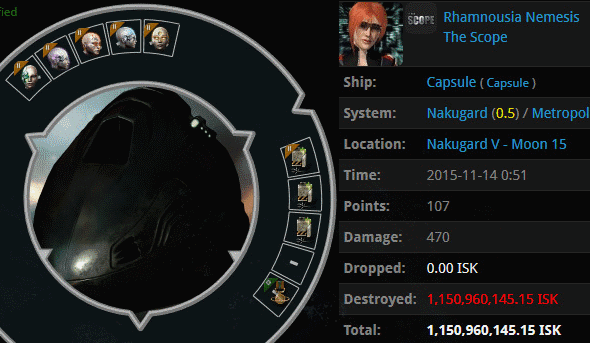 Usually bot-aspirants will at least hide their expensive pods in a shuttle. Rhamnousia's naked pod contained 1.1 billion isk worth of implants. Alt 00 either had really good instincts or X-ray vision. In any case, it was a good kill. Rhamnousia was taken completely by surprise. The billionaire miner's red hair was blown clean off. 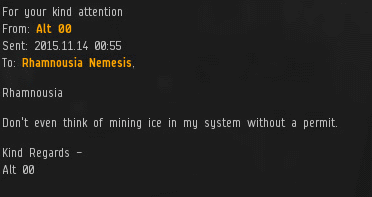 Alt 00 was firm and fair. That's the New Order policy on crime. We're merciful (obviously), but not so much so that we put Code-abiding players in danger.

Though Alt 00 had the power of the Code, Rhamnousia was wily and experienced. She was also driven half-mad by her arrogance, greed, and need for vengeance.

Thus was born a new supervillain: Rhamnousia Nemesis. Too on-the-nose? Their names usually are. 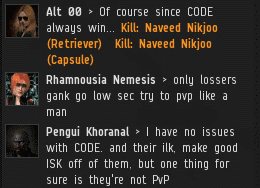 Not thinking much of the angry billionaire's threats, Alt 00 went about her usual business, saving Metropolis and putting criminals away. 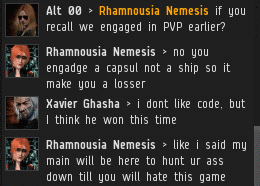 But Rhamnousia couldn't let it go. Metropolis wasn't big enough for the both of them. Rhamnousia Nemesis would see to it that either she or Alt 00 would be destroyed.