Rhamnousia Nemesis was about the drop the hammer on her mortal enemy, Agent Alt 00. So far, Rhamnousia had only shed tears in local chat. But the villainous carebear warned that her revenge could take place at any moment. 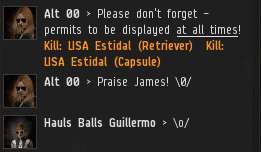 Agents of the New Order don't have time to worry about threats. They're too busy being awesome and constantly winning, as seen here. 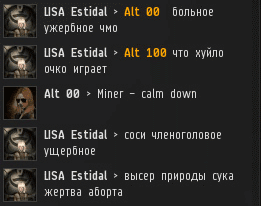 For reasons Alt 00 couldn't discern, LISA Estidal reacted to being ganked by spamming in local. Alt 00 didn't speak Russian, but just to be safe, she told the miner to calm down. This is what we call a New Order "best practice". Rare are the occasions when a highsec miner doesn't benefit from calming down--except when they fall asleep at their keyboards. 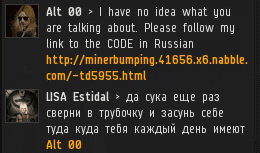 Luckily for Agent 00 and her new friend, New Order linguists have translated the Code into Russian and other languages. (Kalorned is still offering a 100 million isk bounty to anyone who can provide a good French translation.)

LISA's spamming became uncontrollable. Agent 00 had no choice but to use Google Translate as best she could. 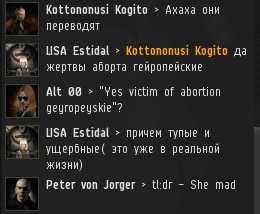 Though far from perfect, Google Translate is still accurate enough to determine if a miner is mad. 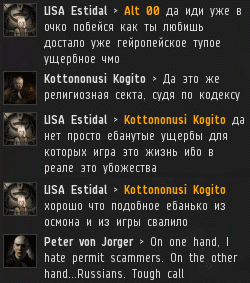 Russian miners are like neighborhood dogs: Once one starts barking, it sets off all the others in the area. 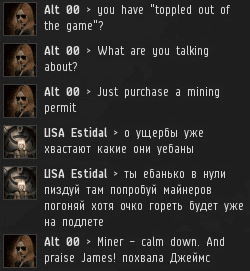 LISA may have threatened to rage-quit, but Alt 00 couldn't be sure. Satisfied that she'd done her due diligence, our hero dropped a good "praise James" in local and went on her way. Days later, there was still no sign of Rhamnousia Nemesis. Alt 00 had almost forgotten about her. 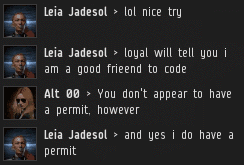 Still on the lookout for her nemesis, Alt 00 happened upon a Noctis and opened fire. Intriguingly, the ship was too well-tanked to destroy. Had the Code failed for the first time? 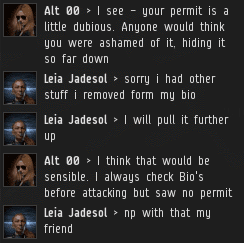 The industrialist, Leia Jadesol, seemed familiar somehow. And she was behaving in a manner far more Gallant than one would expect. What could all this mean? 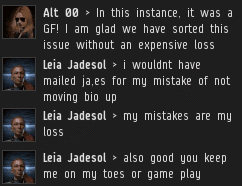 It was fate: Leia Jadesol was a New Order shareholder, not a bot-aspirant. 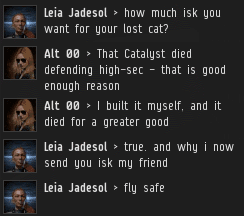 The Code always wins--always--and this occasion was no exception to the rule. As time passed, Alt 00 came to the conclusion that Rhamnousia Nemesis wouldn't be showing up again. The New Order's nemesis had been defeated off-screen, apparently. It's just as well. All the time in the world wouldn't be enough for our Agents to witness every rebel defeat.
Posted by MinerBumping at 18:47