Previously, on MinerBumping... Eight-year EVE veteran Baddaxe lost a fail-fit Retriever and a pod in Hek. Luckily, one of the gankers took it upon herself to help him. It was Agent Crash Bang Zoom, who weathered the storm of his insults with dignity and grace, in typical New Order fashion. Crash told Baddaxe that his problems would be solved with the help of the Saviour of Highsec. Suddenly, Baddaxe seemed receptive. But was his change of heart genuine--or a carebear ruse?

Crash was excited when Baddaxe expressed an interest in seeing what the Saviour had to offer him. So far, so good.

The ruse didn't last long. To be fair, highsec miners aren't known for their patience. Baddaxe probably did the best he could.

Baddaxe gloated about being able to mine freely in the system. Like most miners who claim to be content, he didn't seem very happy.

Despite his rebellious attitude, Baddaxe couldn't help but be curious about the Father of the New Order. They don't call me "the most interesting man in highsec" for nothin'.

Crash continued to learn more about the miner she was trying to help. Unfortunately, Baddaxe was another one of those "If you had done X, then I would have done Y" types. Every miner will obey the Code eventually, but those guys will surely be the last to comply.

The miner's claims of success rang hollow, but they still called for an investigation. Was Baddaxe really getting away with mining in a Hulk, right under Agent Crash's nose?

Not every skill improves with practice. Despite their constant lying, miners are bad at it. Baddaxe's plan failed.

Baddaxe asked our Agent what it was like to be a "low life lying scum sucking pig that can't really fight." There was no need to answer; Baddaxe had plenty of first-hand knowledge.

Say it with me now, readers...

All in all, Baddaxe found his experiment with resistance to the Code to be deeply unsatisfying. He left for greener pastures. But not before he updated his bio: 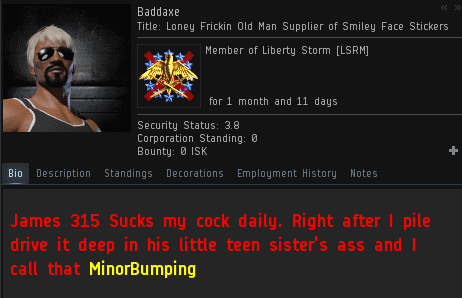 Baddaxe took a break from EVE for a few weeks to cool off. When he returned, he took a trip through a trade route and witnessed Agent Myevil Gankalt enforcing the Code against another offender. Baddaxe checked Myevil's bio and discovered she, too, was an Agent of the New Order! Baddaxe convo'ed her.

Why do rebels insist on calling our Agents player owned stations?

Baddaxe's vacation from EVE wasn't long enough; he hadn't calmed down one bit. One could only hope that he hadn't gotten any worse.

I think I understand now why CCP opted to limit the functionality of the walking-in-stations content. At any rate, Baddaxe remains a work in progress. He recently spent some time in wormholes, where he uselessly lost a small number of Drakes. Our Agents are cautiously optimistic about his chances of recovery.
Posted by MinerBumping at 18:45