The Best Legal System in Highsec

To some, a good legal system is one that resembles trial by combat: Two attorneys battle it out and the truth reveals itself during the clash. Meh. So much uncertainty remains. The best legal system is one in which there is one agreed-upon reality, a controlled environment with no room for doubt. In such a system, the defendant confesses his guilt, enthusiastically--ecstatically, even. The trial shows the world that everyone is on the same page, marching together in perfect harmony.

Highsec industrialist ToJas O'Dunlaing was hanging out with some Agents while he awaited his day in court. 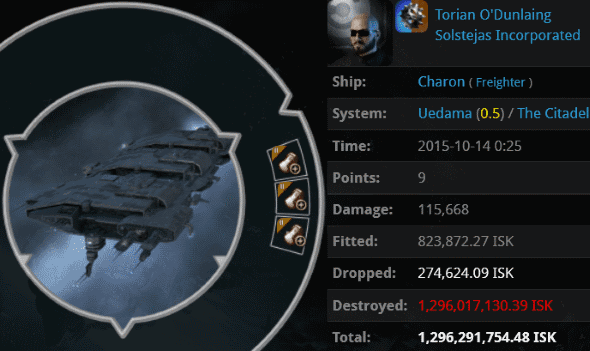 ToJas' alt, Torian O'Dunlaing, had been caught in Uedama with a triple-anti-tanked freighter. He didn't wish to remain an enemy of the state. He wanted to take full responsibility for what he had done. Only then could he get a fresh start.

In modern highsec, justice is swift. It didn't take long for part-time judge 412nv Yaken to get to ToJas' case.

Typically, Agents of the New Order are Renaissance men with a wide variety of skills and interests. In addition to being an elite PvP'er, HotShotX Warcastle is an accomplished space lawyer.

There was no question of ToJas' guilt. He'd been ganked by New Order Agents, after all. The only issue was how ToJas could reconcile himself to highsec society and rejoin civilization.

HotShotX Warcastle delivered a brilliant speech on behalf of his client. The Agent knew the proper way to help a defendant in a New Order court. The purpose wasn't to help someone escape the consequences of a crime he'd committed by denying his guilt; it was to demonstrate to all an important lesson about the Code. The real benefit of a trial like this is that it reinforces the community's faith in the system.

As 412nv Yaken took a moment to consider his decision, the well-behaved masses waited patiently.

Whatever the judge decided, everyone was 100% confident it would be fair and just.

Controversy and drama are unnecessary in a truly well-run legal system. Everyone can walk away from the trial with a smile.

As expected, a fair result. As part of ToJas' rehabilitation, he was instructed to receive baptism by CONCORD.

It was a wonderful occasion. ToJas helped kill an unlicensed miner and received a shiny new killmail.

The rebels think they can use space lawyering to weasel out of the Code, or even to get Agents banned from EVE. But in a New Order court, the whole view of space law as an adversarial system is seen as a relic of the past. Why should participants in court battle each other, when they can all agree that the real enemy is bot-aspirancy? 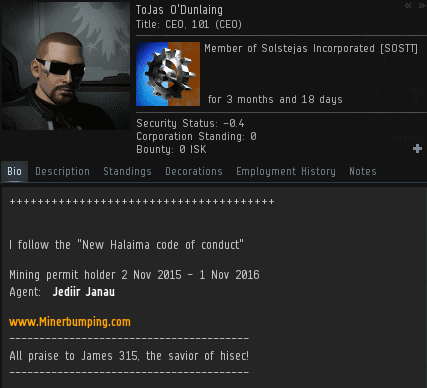 Despite entering a guilty plea, ToJas O'Dunlaing felt like he'd won in court that day. In truth, he absolutely did. ToJas got right with the Code, and the CODE always wins, always. Everybody was a winner. Except maybe the guy ToJas ganked, but even he received content. Smiles all around, exactly as intended.
Posted by MinerBumping at 19:18