Previously, on MinerBumping... Rebels and skeptics say that miner ganking doesn't accomplish anything in the long run, that shooting ships in highsec doesn't make a difference. But Agent Maou Solidus proved them wrong when one of his Hulk ganks sparked a revolution. The Hulk belonged to a "paying customer" of Admiral Foxbolt, who found himself at the center of a storm. Permabanned by CCP Falcon, he was left with no choice but to roll an alt and take his fight to the enemy: The cynics and cyber-bullies of EVE-O.

Foxbolt's apology thread wasn't warmly received by the community. From the very first reply, Foxbolt came under fire from critics who excoriated him for his plan to charge corp members real-life money.

The more Foxbolt defended himself, the more the sharks began to circle him. Blood was in the water. People who hadn't been following the drama on Reddit were attracted to the thread and outraged. It seemed that Foxbolt was only making more enemies.

But Foxbolt anticipated all of this. The Political & Legal Chess Master was thinking 20-50 moves ahead. Now he unleashed his planned counter-offensive, responding to each and every reply with a counter-reply of his own. For the first time, he also revealed that the whole "corp fee" scandal was actually the fault of another player, whom he chose not to name.

For a long time, EVE-O had been mostly dead. Foxbolt's thread brought it back to life. He had the ear of the community, just as he'd hoped. But he was also forced to fend off an onslaught of new attackers.

Coming to EVE-O was a high-stakes gamble. Foxbolt was a fugitive from a permaban. At any moment, a moderator could step in and close the thread. For the time being, the ISD slept. Foxbolt had a window of opportunity. He could only pray it would be enough.

When the thread began, Foxbolt was the very picture of tranquility (no pun intended!). As time wore on, his composure began to break. He was tanking an extraordinary amount of DPS. It would take all of his discipline and training to hold up under the pressure.

In every thread, there comes a turning point. It's a time when a good-poster enters the fray and sums things up in an unquestionably reasonable fashion. Kaely Tanniss added her contribution to the thread, to widespread approval. This is where the story would normally end. Except, again, for one thing... 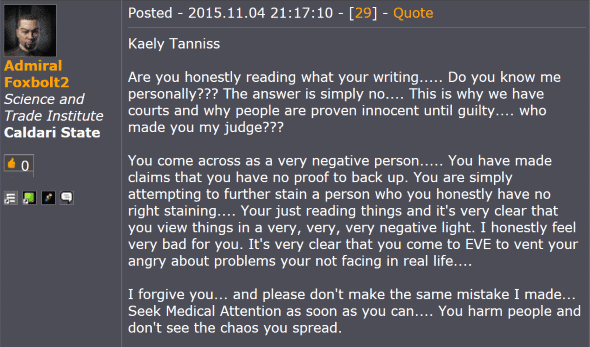 An hour and a half into the thread, there was still no sign of the ISD. Outnumbered and outgunned, Foxbolt still wasn't backing down. The siege of EVE-O went on. 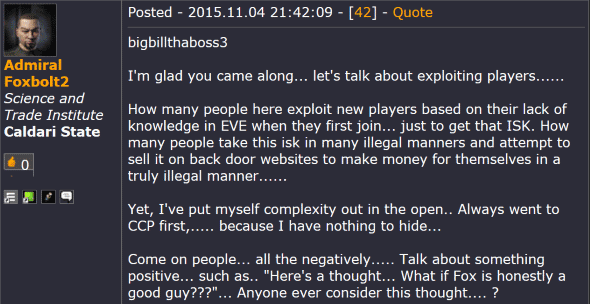 So far, Foxbolt hadn't managed to win over a single supporter. How could they not see that he was the good guy in all of this? Perhaps the EVE community was even more cynical and suspicious than he had feared. Was it too hostile now? Was it too broken even for a player-retention and human relations expert to fix?

The hyenas closed in on the proud lion. Surrounded on all sides by a relentless and growing swarm of enemies, even Foxbolt must have felt moments of doubt. There was one thing he knew that they didn't, though. The Political & Legal Chess master had saved a trump card, an ace up his sleeve. He was holding onto it, just in case his plan to win over CCP Falcon and the EVE-O community didn't work. It was his final play, and he hoped he wouldn't have to use it. He wouldn't, not unless his thread was locked. Still, having that secret weapon in his arsenal helped steady his nerves.

Even so, Foxbolt's tank showed signs of weakening. His famously calm and collected demeanor began to crack.