Goons to the Rescue, Part 1

It was another busy day on the highsec beat for Agents Chocolate Mooses and Karmafleet Is Recruiting. Suddenly, our heroes received an urgent report. Trouble in the Tash-Murkon region! 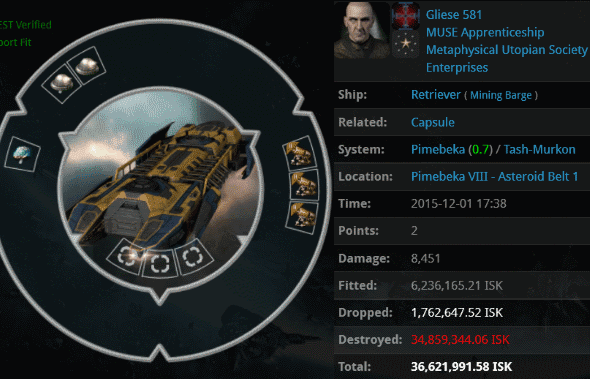 Gliese 581 was illegally mining. Caught red-handed, the carebear was destroyed. Gliese didn't learn his lesson. Only three days later, he was caught again in the same system.

After two weeks of silence, Chocolate Mooses was shocked to receive a threatening EVEmail from Gliese. 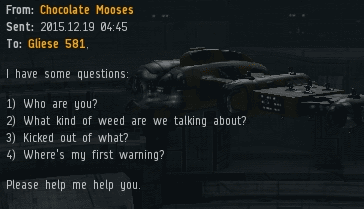 Since Gliese's EVEmail didn't make sense, Chocolate still held out hope that it was all a big misunderstanding. If two EVE players discuss something in a calm, rational manner, problems like this can usually be worked out.

The convo window was hardly on the screen before it was filled with Gliese's venom.


Chocolate Mooses > Ahhh! I was confused. Please, give me a moment to examine my logs, this sounds very serious.
Gliese 581 > yeah u damn right its serious
Gliese 581 > ill send u home

Now Chocolate was in the horns of a dilemma. If she didn't pay Gliese a hefty ransom, he'd kick her out...?


Chocolate Mooses > Well, I sure would hate to get "kicked out" of whatever you are going to kick me out of! This sounds like a urgent issue! I'm already at home, however, so no need to send me anywhere.
Chocolate Mooses > Can you please provide the loss mails?
Chocolate Mooses > So I may verify your claims?
Gliese 581 > i want 1 Billion thats all

A billion isk is a lot. That's like a hundred New Order mining permits. Chocolate took the miner seriously, but she wasn't going to hand over a fortune without some evidence of wrongdoing.


Chocolate Mooses > Thanks for talking to me first before kicking me out of something (not sure what), let's get this sorted and be calm about it, okay miner?
Gliese 581 > no questions
Gliese 581 > 1 BILLION ISK
Gliese 581 > this is your last chance

Chocolate tried to smooth things over, but Gliese was stuck in hardball mode. He wasn't interested in anything but the money.

Finally, Chocolate managed to turn down the temperature. She offered to search for the killmails herself. Only when she raised the possibility of paying the miner money did he start to calm down.

The very mention of the Code was enough to trigger a complete diplomatic breakdown. Gliese blocked Chocolate from all further communications. Now she had no way of knowing what she was going to be kicked out of. However, it was reasonable to assume that Gliese meant he was going to kick Chocolate out of her corp or alliance. So she did what any responsible person would do in this situation: She contacted an alliance leader. 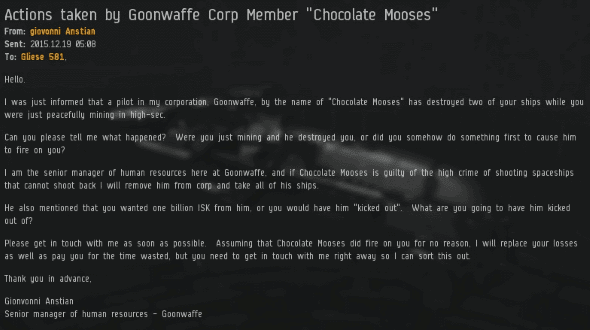 Click for full-size version
Chocolate Mooses was a member of a little alliance called the Goonswarm Federation. Her immediate superior was giovonni Anstian, a senior manager of Goonwaffe human resources. giovonni offered to help Gliese get reimbursement.

Imbued with a new, friendlier attitude, Gliese was happy to talk.

The Goonwaffe official got right to business. He was astonished to hear about what Chocolate had been doing while unsupervised.

Now that Goon authorities were involved, the rogue Agent was going to be held accountable. Had Chocolate made a mistake by contacting giovonni? Was she going to be kicked out--or would she need to pay a billion isk to the miner? Or perhaps something else entirely was about to happen?