Saving highsec can be exhausting. Where do our indefatigable Agents get all their energy? The Code, obviously. Nevertheless, when dealing with swarms of angry carebears, it's usually best to just gradually ease into it, take on some of the more reasonable ones first, and-- 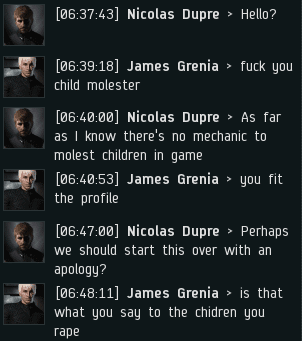 But some days they're all lunatics. Welcome to the latest edition of the Highsec Miner Grab Bag!

derf Joringer was furious that he hadn't been given a chance to leave before our hero arrived to defend the ice anomaly. Unannounced visits tend to be more memorable, though. 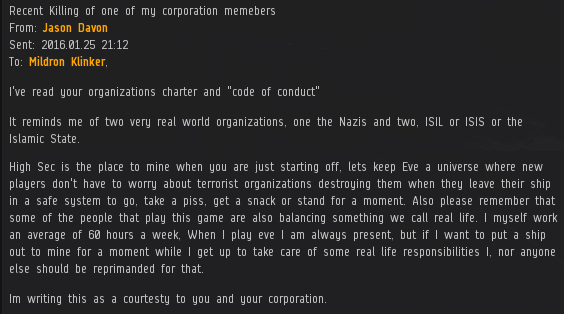 Jason Davon's complaint actually highlights another of the services provided by the New Order. The man works too hard. Even when he takes a break from his busy life to play EVE, he finds himself getting up to "take care of some real life responsibilities". Our Agents ensure that EVE players remain focused on relaxation.

Unsurprisingly, Jason found himself on the receiving end of a wardec. He claims his first loyalty is to his brother. He could learn a thing or two from Jaroth Kings and his cousin.

Apparently in-game AIDS is rampant these days, because wishing a disease on someone in real life because they shot your spaceship and "acted polite" afterward would be crazy.

Quork Hummel lost his mining vessel and wasn't too happy about it. But he saved his harshest words to be spoken by his Orca alt:

Miner tears tend to follow certain trends. For a while, it was all about wishing cancer on Agents' family members, then it was about people dying in fires. Now this AIDS business. Where does this stuff come from?

You guessed it: the Anti-Ganking channel. 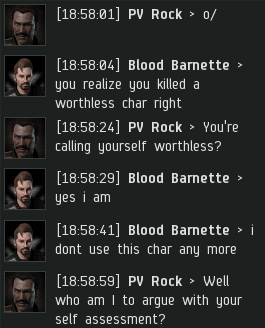 Our Agents are so good at ganking freighters that sometimes freighters self-destruct, vainly attempting to avoid producing a killmail. Our Agents are equally good at winning arguments. So we shouldn't be surprised to see carebears like Blood Barnette performing the rhetorical equivalent of a self-destruct. 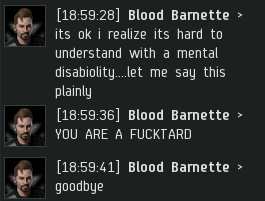 But they, too, are unable to prevent our Agents from getting credit for their victories.

Agent Bing Bangboom is a figure of towering dignity in highsec. His very presence in local is enough to inspire carebears. When Bing entered the system, SpacePeanut Udan had to stop what he was doing and write down every thought that came into his head. 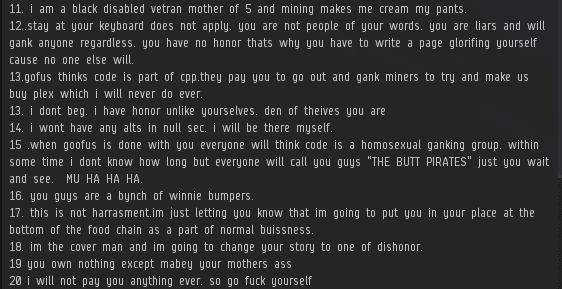 When miners brainstorm, this is the result.

SpacePeanut stopped numbering his thoughts, but he wasn't particularly good at counting to begin with. Sometimes people ask themselves, "What was that miner thinking?" Now you know. 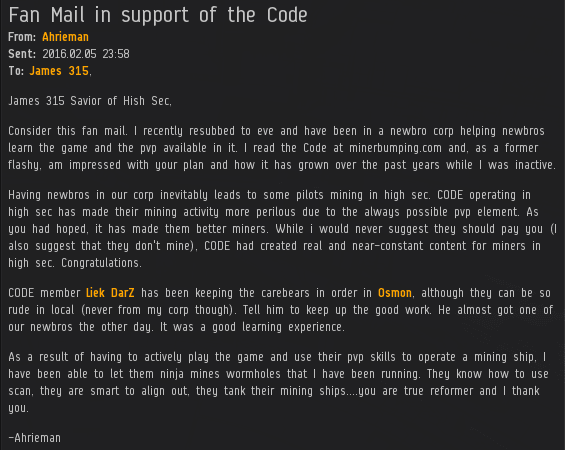 If you don't believe me, take it from the countless EVE pilots whose gameplay we've enriched: The New Order is the best thing that has ever happened to new players. Agent Liek Darz, keep up the good work. And that goes for the rest of you, as well.
Posted by MinerBumping at 19:20