People Who Scare Away New Players

Every gank is a gift. It's an opportunity for a miner to prove, through his reaction, that he's worth keeping as a member of the EVE community. We all know that AFK miners add nothing to the game, but if they're willing to turn their lives around, they can begin to contribute. 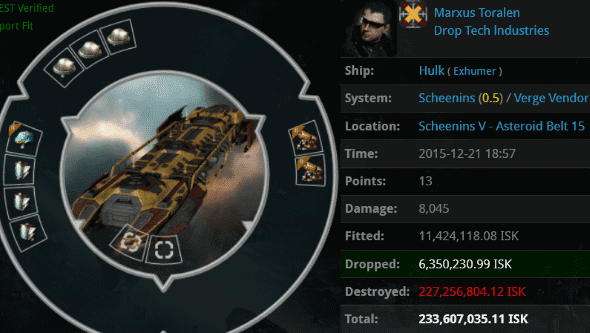 Meet Marxus Toralen. Despite logging three years in the game, he was mining in highsec with an untanked Hulk. Agent Zopiclone gave him the gift of gank. Would Marxus rise to the occasion? Or would he flame out like a Goofus?

Hmmm. Not much to go on.

Zopiclone had to admit that the first signs weren't very encouraging. It was time to move this conversation to Scheenins local chat.

In local, sometimes a carebear will tone down his language to avoid embarrassing himself in front of others. That wasn't Marxus' style.

Marxus bitterly accused Zopiclone of driving people away from EVE. Unlike Marxus himself, who's a real people-person. Dealing with someone like Marxus is a real draw for potential EVE players.

The miner threatened to quit EVE, apparently for at least the second time. Accused of racism, Marxus casually reassured Zopiclone (and everyone else in the system) that he used racial slurs in a non-racist way. Maybe Zopiclone was the real racist, for jumping to conclusions?

Marxus wasn't one of those rebels who claim that the New Order has no effect on highsec; he was of the school that believes we're solely responsible for the decline in EVE subscriptions. This bothered him, because apparently it's more enjoyable to AFK mine when lots of other people are also AFK mining.

The miner placed all his hope in CCP. Nothing else could stop the New Order. What, are the Anti-Gankers chopped liver? (No, even chopped liver wins some of the time.)

Marxus launched into an impassioned speech about how much he loves EVE and EVE players. The New Order ruins the game for people who want to AFK mine and use racial slurs in a non-racist way.

If he cares so much about the newbros, why did Marxus only begin complaining about the Code after he lost his Hulk?

Marxus concluded his rant with an unintentional indictment of the mining mechanics. Still, he believed the game would be more fun with more players. Who wouldn't want to hang out with a bunch more people like Marxus Toralen?
Posted by MinerBumping at 19:06