The Destroyer of CODE, Part 3

Previously, on MinerBumping... Chip Patton told everyone who would listen that he'd completely destroyed CODE., even going so far as to claim that he was responsible for getting 90% of its members permabanned. Agent loyalanon politely requested evidence, prompting Chip to come up with all sorts of excuses and stories, most of them centering on the fate of a player named Nemuritoru.

The convo was over, but Chip sent additional "information" to loyalanon as he thought of it. The proof that Chip destroyed CODE. had something to do with a group called "IKR". Simply name-dropping IKR was all the vetting Chip could do. He was exhausted.

Though Nemuritoru was able to join new corporations after supposedly being permabanned, Chip suddenly realized that he had a smoking gun. Ignoring Chip's parenthetical remark, the proof that Nemuritoru was banned: "Because Oggie." Chip's proof consisted of making up words at this point.

It was true that Chip had a medal falsely claiming he'd destroyed CODE. But the real issue, according to Chip, was the identity of the player who'd told loyalanon about the medals. 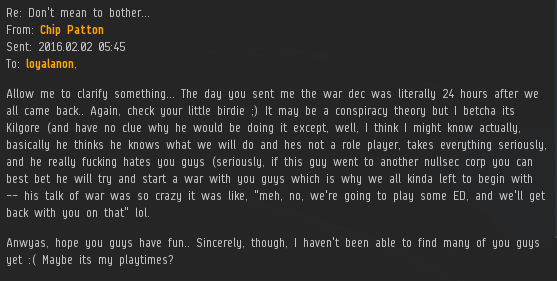 As carebears often do, Chip sent loyalanon another EVEmail without waiting for a reply.

...And another. Chip started off by saying he wanted to attack some CODE. members (despite destroying/permabanning everyone months earlier), but they "were already podded and ran."

It must be frustrating to go to war with a group that you've already driven from the game. Chip was up to the challenge, though he admitted he wouldn't be "the guy in the center of the battlefield."

Destroying CODE. was Chip's proudest achievement, but he wasn't going to brag about it while fighting CODE. 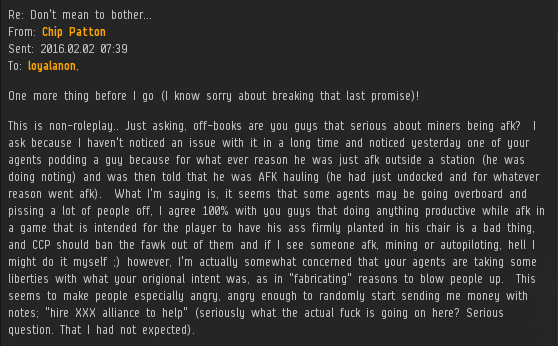 Chip had more thoughts. After pondering the Code, he had to confess that he agreed with a lot of it--a common side-effect of actually reading the Code! Chip felt that AFK players should be eligible for bans, much like the 90% of CODE. members who'd been banned already.

As long as he was typing things, Chip shared another of his war stories. It didn't involve any ships being killed. 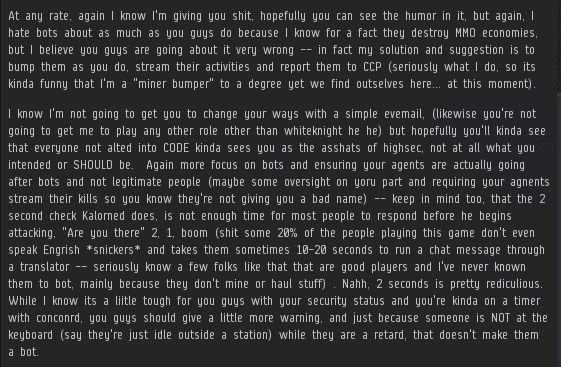 The man who had completely removed CODE. from EVE gave some friendly advice on how he thought CODE. should conduct its activities in EVE.

In fact, the more he thought about it, the more Chip came to realize that the Destroyer of CODE. and CODE. were natural allies. Sadly, a reply from loyalanon was not forthcoming. It was time for Chip to take this to the next level.

To be continued...
Posted by MinerBumping at 18:36