You knew this was coming, and here we are. The number of Grab Bags has gone into triple digits. After all this time, have the carebears of highsec finally learned to stop embarrassing themselves?

It may be another hundred Grab Bags until these miners wise up.

"New requirement" indeed. If only miners were as instinctively attuned to the Code as they are to Miner Bingo quotes.

"I would have paid." I'm telling you, it must be in their DNA!

If killmails didn't exist, the carebears would probably say that we've never ganked a miner before. 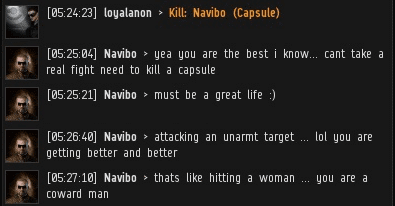 Dairio Dadunur isn't the first one-handed player who felt it was unfair of others to shoot his spaceships. I still contend that as far as video games go, EVE's controls are uniquely suited to one-handed players. 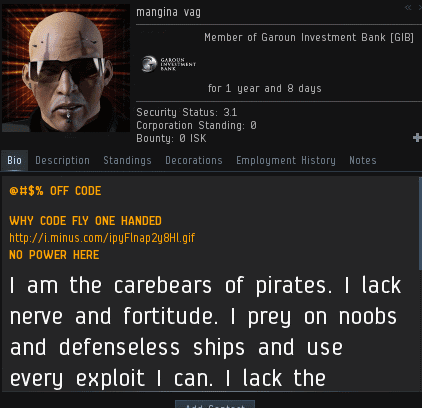 ...Even some rebels agree.

Miners, enjoy life for what it is. Don't get too hung up on what might have been.

Agent Chocolate Mooses had little to offer this miner but the standard advice we give to all.

I sincerely hope "miner calm down" translates easily into Russian. If it does, I haven't seen much evidence of it. 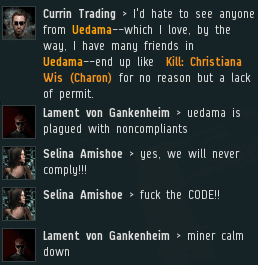 At this point, losing multi-billion isk freighters instead of buying a 10 million isk permit isn't taking a principled stand. It's just weird.

For a potential Gallant, being killed by our Agents is the starting point of a grand adventure. It's what enables a carebear to transition from a life of drudgery and repetition to a life enriched by emergent content. Or, you know, you can whine or quit or petition or make death threats or whatever. EVE's a sandbox.

Without exaggeration, the Code has brought more content into EVE in the last few years than all of the CCP devs combined.
Posted by MinerBumping at 20:41