Out of PLEX and Excuses

Miners often complain that they weren't given a warning before being ganked. In fact, miners desire a warning so much that they see in the Code a guarantee of being provided one--though no such provision actually exists. They love to say, "I would've bought a permit, but now I won't." But what happens when a miner is given an invitation to buy a permit immediately before the gank?

Having some extra security status to burn, Agent Zopiclone slowboated up to Dashh Rendar and invited him to a convo. The miner was instructed, point blank, to buy a permit or die. Apparently this wasn't warning enough. 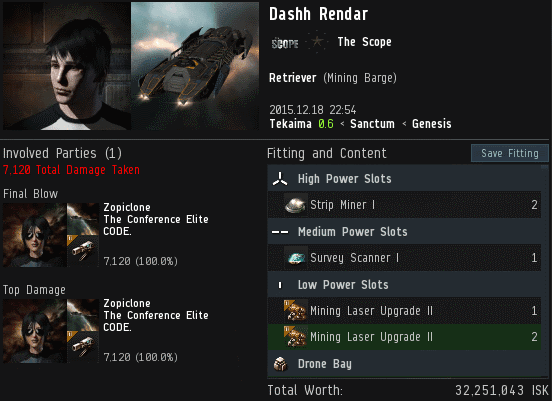 Dashh claimed total ignorance. He was wrong to say he'd never been asked to buy a permit. Didn't Zopiclone ask him only a few seconds ago?

Although Dashh had never encountered the New Order before, his inner carebear took over. He instinctively reached for the word "extortion".

Dashh's was a tragic story. He needed to earn enough money to buy PLEX within four hours. If he didn't make it in time, he would be forced to leave the game. Or, you know, pay the subscription for a subscription game.

In local chat, fellow Agent Shinkiro Sayonara proclaimed Zopiclone's victory. Dashh informed everyone in the system that he ran the risk of not earning "free" game time.

It's getting tougher and tougher to play the Rip Van Winkle card these days. The Code has been around for many years now.

As Zopiclone pointed out, Dashh had ample opportunity to buy a permit. Even with a Catalyst pointing guns in his face, Dashh declined. So much for the "I would have paid..." crowd.

In my experience, people who are going to do something don't say "I would have done it, but now I won't." They just do it.

The miner was repeatedly instructed to calm down. He refused this command, too. Judging by their behavior, you'd think calming down was even more difficult than paying 10 million isk.

Time was running out. Dashh was very dramatic about the whole matter. Were our Agents supposed to be anxiety-ridden about the possibility of EVE losing another highsec miner?

Dashh bitterly suggested that he would've been ganked even if he had bought a permit. I guess we'll never know?

Caught in multiple lies, Dashh suddenly lost all interest in arguing his case in local.

More Agents entered the system. As Zopiclone and Shinkiro greeted them, Dashh grumbled that he hoped another miner would give them what they deserved. I hope so, too: For starters, they deserve 10 million isk!
Posted by MinerBumping at 19:58