Bling in the Era of the New Order

Highsec was once the most stagnant place in EVE. Now, thanks to the Code, things are changing. And as we all know, the only way to truly change highsec is to change the people of highsec. We win hearts and minds, of course, but we also change the way people think and feel about EVE. We change their values.

Bluejay Destros lived the life of a typical miner. She came to EVE, she spent some time in the game, and she was treated to a complimentary player-retention service, courtesy of one of our Agents.

Despite being assisted by Agents BAE B BLUE and Liek DarZ, Bluejay was vulnerable. She had a permit, and she knew a bit about the Code, but her conception of wealth in EVE hadn't changed.

Uh oh. The consequences of being "helped" by the Anti-Ganking crowd: 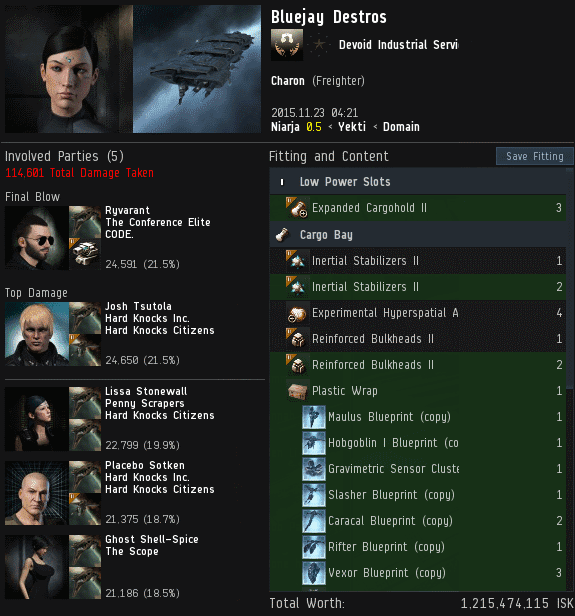 KABOOM. It didn't take long before Bluejay was ganked. (An impressive quintuple-Talos gank, at that.)

Bluejay learned her lesson. She knew she needed to turn her life around, to get back what she'd lost when she'd abandoned her permit and her Code.

It's not unusual for wayward industrialists to return to the fold, but Bluejay had a unique mission. 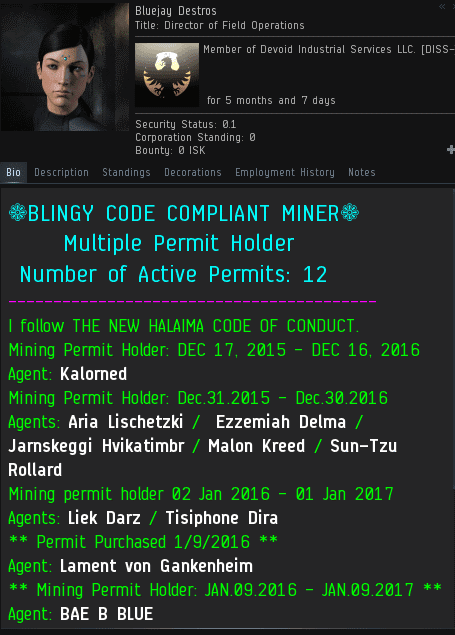 In a Kills of the Week post, I wrote, "One day, after the New Order achieves final victory in highsec, a 'blingy' ship will refer to one that has multiple New Order permits. Until then, bling represents decadence and costly bot-aspirancy." This inspired Bluejay to begin collecting as many permits from as many Agents as she could. 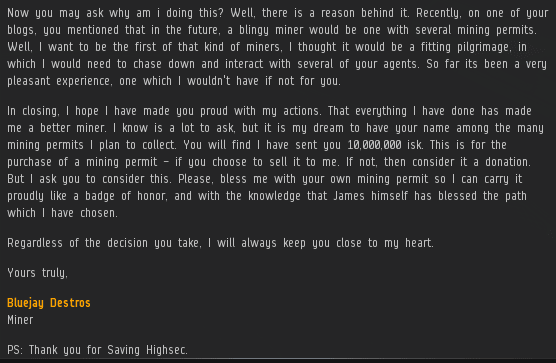 I couldn't be prouder of Bluejay Destros. I hereby grant her the blessing/permit she requested. I've seen people buy more than one permit before, but Bluejay took the idea a step further by articulating a revolutionary truth: The true wealth of a highsec dweller comes not through isk, but through exceptional Code-compliance. 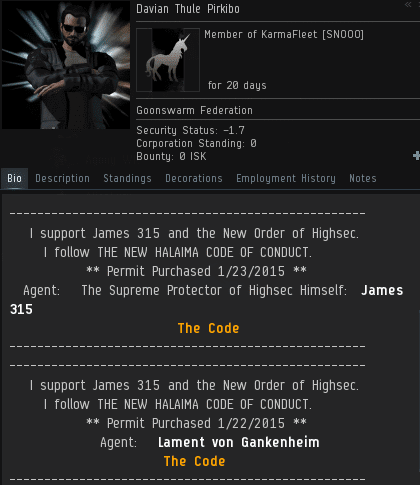 The idea may be catching on.
Posted by MinerBumping at 18:50