Previously, on MinerBumping... Mourning Hyland finally made her grand appearance in local after being ganked by Agent Alt 00. Our Agent's instincts told her that Mourning could be saved from her self-destructive bot-aspirant tendencies. For now, though, the miner steadfastly refused to have anything to do with the Code. 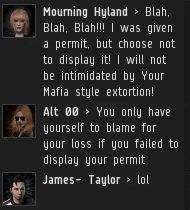 Mourning was an odd duck. She claimed to own a permit, but refused to use it. And she sounded for all the world like a total Goofus.

Things got nasty. At least, I think they did. Can anyone guess what Mourning's "GF" stood for? 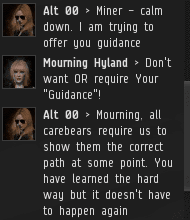 Rebellious miners resemble rebellious children. Alt 00 decided that instead of talking about how much the miner needed guidance, she'd simply give the miner guidance--the best way she knew how: 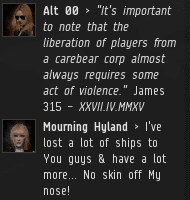 Quoting me is always a good plan. On occasion, my words can soothe a savage miner. Even when they don't, they're edifying and useful for instruction. 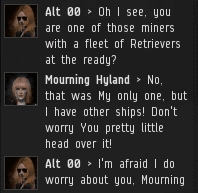 The defiant miner was in a downward spiral. Alt 00 took pity on her. There was still a glimmer of hope: Mourning actually admitted that she didn't have a stockpile of extra Retrievers. A more obnoxious carebear would've played the "loss has already been replaced" card. 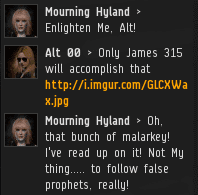 Mourning was semi-familiar with the Code. She had no interest in it. The Code wasn't her "thing". Carebears, if you live in highsec, the Code is everything. 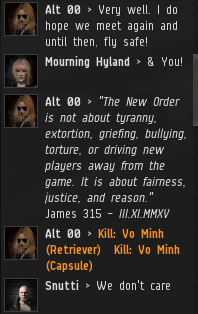 Mourning and Alt 00 parted ways. She was no more willing to become compliant than before. Were our Agent's instincts wrong? Unruffled, Alt 00 resumed her duties. 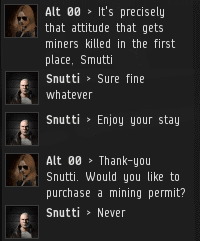 Our Agents are never discouraged. They're perfectly satisfied by the knowledge that they're doing the right thing. That is its own reward. 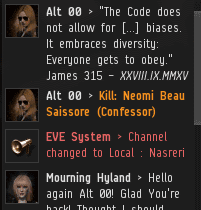 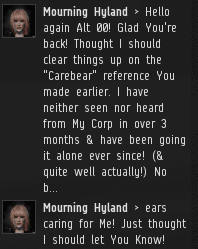 An experienced Agent knows how to read between the lines. Mourning was adrift, abandoned by a corp filled with isk-driven carebears. Despite her tough and prideful exterior, Alt 00 knew the miner must've been feeling neglected. Lonely. 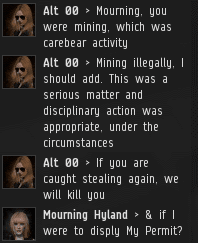 Alt 00 didn't express her pity openly. She projected a sense of order and stability--which is exactly what she knew the miner needed. 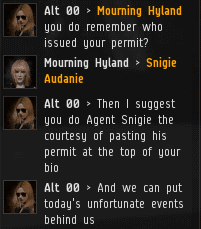 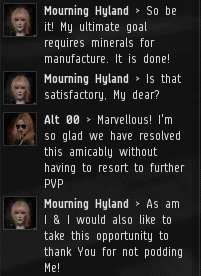 Another reason why our Agents are never discouraged: The CODE always wins. Always. 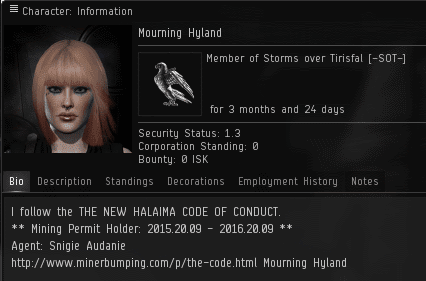 No matter how much they may protest against the New Order, there's a Code-shaped hole in every miner. They can try to fill it with isk and Miner Bingo quotes and Anti-Ganking toxicity, but only for so long. Eventually, they'll come home. (Or quit EVE.) 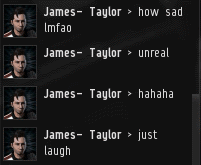 Whenever a rebel is rescued from a terrible fate, the other rebels are disgusted. But their time will come also.
Posted by MinerBumping at 18:59