Governing highsec is an even more complex job than it sounds. Everyone knows that CCP is inundated with petitions, many of them frivolous. Indeed, even as far back as 2013, the New Order's activities were already the biggest single cause of petitions. When it comes to highsec governance, however, a lot of players have complaints and concerns that don't get sent to CCP. They're sent to Agents of the New Order instead. How do our Agents respond? 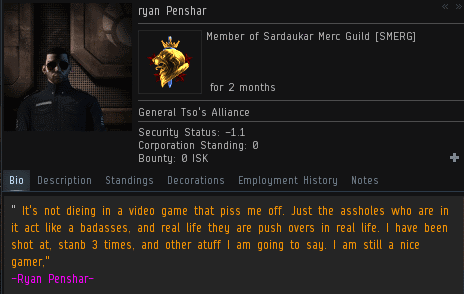 Today, we look at a classic case of complaint management. The "petitioner" was the ever-quotable ryan Penshar. He wasn't particularly enthusiastic about the Code.

One of the most common problems our Agents face is that they get complaints out of the blue. Agent Alana Charen-Teng had no idea why she was the recipient of an EVEmail from ryan Penshar. Complainers rarely offer a detailed backstory. ryan preferred the in medias res approach. Imagine getting an EVEmail from someone you don't know, and just a few lines in they're already talking about other people killing themselves. Welcome to the ranks of the New Order.

ryan concluded his EVEmail by asking Alana if she'd tried to hack his computer. Talk about burying the lead!

Alana replied by offering ryan the chance to improve his petition. Frankly, ryan needed to start over from scratch. Once ryan had written an EVEmail to the best of his ability, then Alana would read it. She was a busy Agent.

ryan wasn't in the mood to be criticized. He fired back with a series of ominous remarks about websites and IP addresses and servers. Based on his skills and experience, ryan posed a Gibson-level threat to New Order infrastructure. To be clear, though, I do not host anything from a private server in my home. That would be crazy, right?

Once again, ryan raised the subject of a hack attempt against his VPN. He demanded to know if the CODE. was responsible.

Before Alana had the chance to respond to ryan's accusations, he raised the stakes with another EVEmail. This time, he accused the New Order of bribing and/or being CCP employees.

The complaint accused Alana of violating the "Declaration of Independences". I'm no expert on space law, but doesn't the Code supersede that anyway? Regardless, Alana now had a host of different complaints and accusations to address. She decided to answer them one by one: 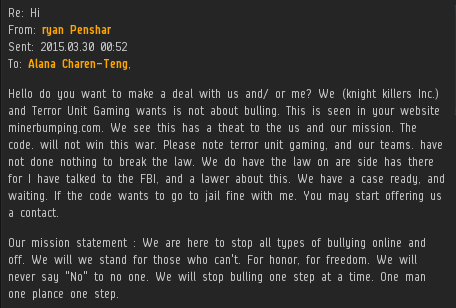 ryan was actually pretty impressed by Alana's response. On the surface, ryan was full of confidence: Backed up by a space lawyer and the FBI, threatening to send the CODE. alliance to jail, etc. But when you're dealing with a sophisticated communiqué like this one, you have to read between the lines. Right from the beginning, ryan asked Alana to make a deal. In the final paragraph, ryan stated his terms:

Alana had six days to comply. Unfortunately, the deal was a non-starter. Even if the New Order had 999 billion isk to give ryan Penshar to reimburse him for CSPA charges and his time, it would've been dishonest for Alana to say that the CODE doesn't always win. Thus, Alana had to let ryan down gently, by not responding to his EVEmail. Sometimes that's the best approach.
Posted by MinerBumping at 18:36