The Destroyer of CODE, Part 1

Emergent gameplay is precious. To the extent EVE Online has been successful, it is only because it gained a reputation as a place where player-driven emergent content could flourish. In other games, such as Elite Dangerous, emergent content is more controversial. For example, consider the recent outcry over an incident of awoxing that occurred in Elite Dangerous. When the developers confirmed it wasn't a EULA violation, a protest thread ballooned into 97 pages.

The anti-griefing movement is organizing an event for the Ides of March. Interesting. Let us now turn to another Elite Dangerous-related matter. To begin with, recall the MinerBumping post about the Elite Dangerous CODE Conspiracy. A fellow named Chip Patton, who plays both games, attempted to rally the ED community against an organization called CODE. He burnished his credentials by claiming that he'd already defeated CODE. in EVE: 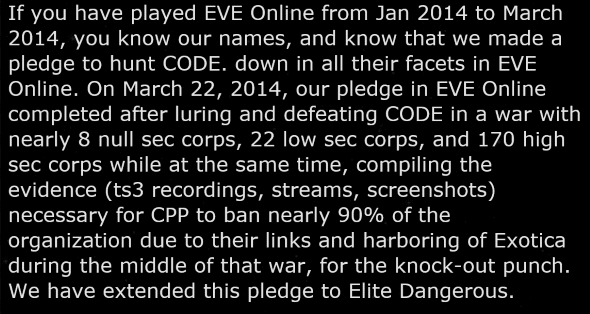 It was quite a victory, according to Chip Patton. For those who belong to CODE. in EVE, an important question remained: Who the heck was Chip Patton? 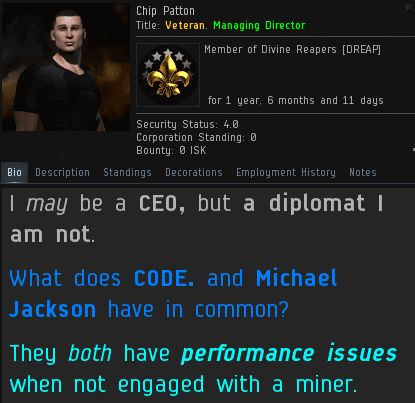 He looks like any other anti-Code resistance leader. Despite his claims of grandeur, he lacks the notoriety of, say, a JTClone Ares or an Admiral Foxbolt. 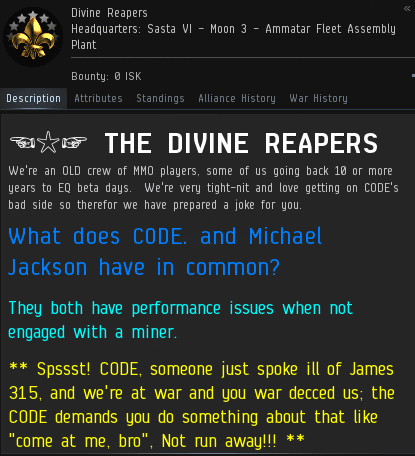 His corporation, Divine Reapers, is similarly unknown. How could this be? 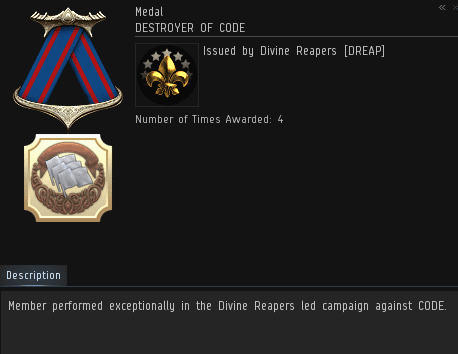 The only evidence of Chip's victory over the CODE. is a medal that was awarded to him. Could it be true? Did Chip and the Divine Reapers really destroy CODE., and nobody knew about it? Agent loyalanon, the CEO and executor of CODE., became concerned about the fate of his alliance. If it was indeed destroyed, he figured he'd better find out. So he arranged a sit-down with Chip himself.


loyalanon > o/
loyalanon > just a quick question looking at your decorations
loyalanon > did you self award them?
Chip Patton > No
loyalanon > then how did you destroy code when we are still going?

loyalanon wasted no time. This was a matter of the utmost importance.


Chip Patton > I only became CEO after the fight Nemeratu/IKR/CODE war-decced us.
loyalanon > how did you get the decoration then if we are still around?
Chip Patton > "Awarded by Kilgoresmudge"
loyalanon > so you didnt actually do anything?
loyalanon > what does becoming a destroyer of code involve? XD

Chip didn't deny that he'd destroyed CODE. But from the very beginning, he showed a tendency to toss around references to unrelated people and organizations for some reason.


Chip Patton > No, I infiltrated IKR which was hired by you guys, gave the Goonswarm trading POS to Marumites and had it blown up :)
loyalanon > so you had to infiltrate an entirely different corp/alliance to code to become a destroyer of code?
loyalanon > how does that work
Chip Patton > Nemeratu did, and on minerbumpers it seems he was pretty high up there.
loyalanon > whos nemeratu
Chip Patton > lol

Chip's theory of destroying CODE. was a lot more complicated than one might think. It involved IKR, Goonswarm, Marumites (The Marmite Collective?) and a mysterious gentleman named Nemeratu.

The allegedly permabanned Nemeratu was shrouded in such mystery that he couldn't be Googled. Either that, or Chip misspelled the name of the character. Regardless, loyalanon found it frustrating to speak with Chip. Like a conspiracy theorist, Chip continually went on tangents about someone who was connected to someone else.

Chip clarified that the man of mystery was Nemuritoru. Despite having an extensive employment history dating back to 2006, Nemuritoru wasn't ever a member of CODE. Furthermore, loyalanon was able to prove that Nemuritoru wasn't permabanned. But Chip took this as evidence of CODE.'s defeat.


loyalanon > you said he got banned
loyalanon > which ive just proven that you lied
Chip Patton > He wardecced us and then... surrendered...
Chip Patton > Yeah kinda what happens when you're the CEO and start a war and get banned (no seriously)

Though Nemuritoru is apparently able to log in and change corporations at will, Chip wasn't convinced that he wasn't banned. According to Chip, if a CEO is banned, his corp surrenders all wardecs. If true, it would be an interesting game mechanic--especially if your corp belongs to an alliance.

loyalanon began to suspect that maybe Chip didn't earn that "DESTROYER OF CODE" medal after all. More and more it was looking like a case of stolen valor.


Chip Patton > No he was banned, I got hate mail from his alt.
loyalanon > some random non-code person gets banned, how does that affect us?
Chip Patton > You can try that if you want, but all the sudden he's talking mad shit on behalf of code (oh and calling me a liar and everything else like you are) and then up and surrenders and doesn't log back in for nearly a year later...

Chip wasn't backing down. From his perspective, Nemuritoru and CODE. were practically joined at the hip. For example, they both called him liars. Maybe there was something to this after all. Had Chip Patton succeeded where all of the other rebels failed?

To be continued...
Posted by MinerBumping at 20:46