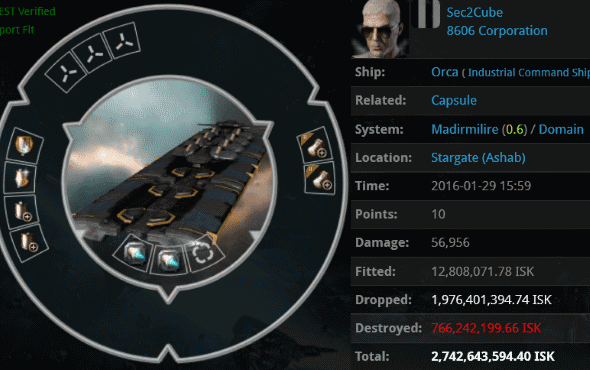 Sec2Cube of the 8606 Corporation looked and acted like a bot as he AFK'ed his way through Madirmilire. He might have gotten away with it, had it not been for the courage of the New Order. His 2.7 billion isk Orca was ganked by a New Order fleet, which mostly consisted of members of the Kusion family.

The Kusions are a model highsec family. They have traditional values. They strongly believe in law and order. Everyone in the family has taken up a career in Code enforcement. They adamantly oppose carebearism, theme parkism, bot-aspirancy, and the like. 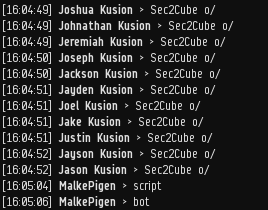 After Sec2Cube's Orca was destroyed, the carebear failed to offer a "gf" in local. But the Kusions wanted to acknowledge him anyway, so they waved in local. 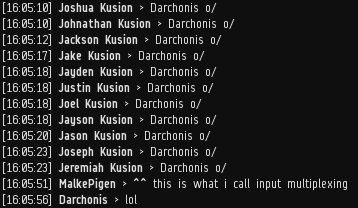 Local Anti-Ganker MalkePigen took notice. She didn't like what she saw.

MalkePigen took a break from her busy schedule of continuously nonstop failing daily, and she petitioned one of the Kusions for botting.

MalkePigen's frivolous petition drew mockery from the locals. But she insisted that she had ironclad proof that the Kusions were botting.

The dizzy Anti-Ganker believed EVE time-stamps displayed milliseconds (or "milisecunds"). If true, the EVE client uses a rare kind of clock that doesn't display the hour. Then again, there would be no need: By MalkePigen's reckoning, there are twenty-four minutes in a day.

In fact, the Kusions' ganking operations are 100% EULA-compliant. They're frequently streamed on Twitch, so you can see exactly how it's done. MalkePigen had seen the stream, but was unconvinced.

MalkePigen didn't buy the cover-up, not for one milisecund. The truth was out there. Way out there.

The Kusion conspiracy went to the highest levels. CCP knowingly harbored bots in order to boost its subscription numbers.

The simple reality is that the New Order has always, and will always, act entirely within the EULA. We don't break the rules; we respect EVE and CCP far too much for that. It would never even occur to the Kusions to cheat, much less bot. Those aren't Kusion values.

Eventually, MalkePigen stopped talking about the Kusion conspiracy. Still, the typical Anti-Ganker has difficulty accepting that the CODE always wins (always). Since Anti-Gankers always lose, they imagine that winners must be cheaters. I extend this invitation to the AG crowd: Try ganking some miners and autopiloters. Try enforcing the Code, even if you don't believe in it at first. Once you get a taste of victory, you'll never want to go back.
Posted by MinerBumping at 18:42