Goons to the Rescue, Part 2

Previously, on MinerBumping... Gliese 581 turned into a volcano of rage when he was ganked by Agent Chocolate Mooses. Gliese spat terrible insults at our Agent and threatened to "kick her out" of something if she didn't pay him a billion isk. Chocolate contacted her Goon superior, giovonni Anstian, who promised to investigate the matter. 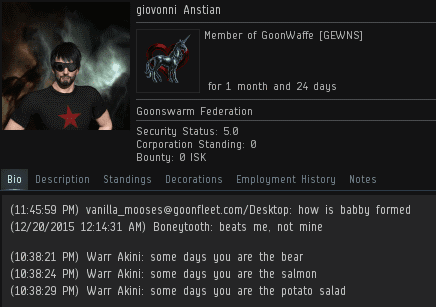 Gliese's mood was much improved after he began speaking to giovonni. Knowing that someone was looking into his case and willing to reimburse him made Gliese feel a lot better.

The alleged Goon "senior manager" couldn't have been more sympathetic to Gliese's plight.

Gliese was well on his way to renewed financial health. Just a few minor formalities to take care of and--

The reimbursement process hit a snag. giovonni didn't have a mining permit on file for Gliese.


giovonni Anstian > Click your character sheet (top left corner, the picture of your character), then click on the "biography" tab - copy/paste your valid permit into your bio! You should have mail from the agent who sold you one, with all the instructions included.
giovonni Anstian > it's okay, we were all new once! Take your time.
Gliese 581 > i dont think i have a mining permit

The miner came to a troubling realization. Was his reimbursement in jeopardy?

When Chocolate told Gliese about the permit earlier, Gliese had responded, "this convo is OVER BLOCKED NOW FAGGOT HAHAHAAH". The miner had become considerably more peaceable since then.


Gliese 581 > how do i get one
giovonni Anstian > Mining permits are 10 million ISK per year, and they are good for a whole year - they are a vital part of the New Haliama Code of Conduct, you can read about it here: http://www.minerbumping.com/p/the-code.html
giovonni Anstian > Once you have you, you place it in your bio, and as long as you are following the code - you will never be ganked by any agent of the New Order. It's really the only safe way to mine in high-sec.
Gliese 581 > ic i will get one

Things were looking up for Gliese. He hadn't gotten his billion isk ransom, true. And to be sure, he wasn't going to receive any reimbursement. Instead, he was paying money out. Yet he still felt like a winner.


giovonni Anstian > Take your time, miner. The love of James 315 is patient, it is kind. It does not envy, it does not boast, it is not proud.
Gliese 581 > good>?
giovonni Anstian > You missed the "All praise to James 315, the savior of hisec!" part. That part is really special and needs to be there.

The helpful Goon assisted Gliese with his new bio. Within a few moments, he was all set: 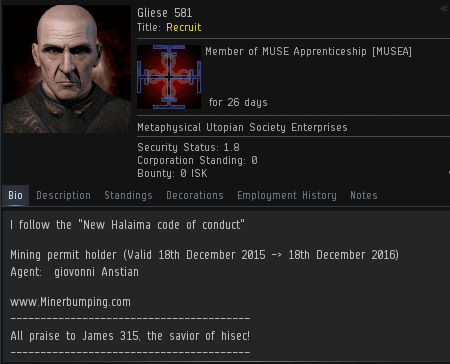 Look at that happy miner!

Gliese is another example of why our Agents never give up. When first asked to buy a permit, the miner's behavior was disgraceful. He would've told anyone who asked that he'd "never" pay. When given enough opportunities, however, he changed his tune. A few weeks later, Gliese decided that highsec mining wasn't for him. He removed his permit, abandoned the life of a miner, and went off to nullsec to join Pandemic Horde. Though discarding one's permit is wasteful, Gliese no longer poses a threat to the safety and tranquility of highsec. It was a victory for the miner, our Agents, and the Code. Highsec, rejoice!
Posted by MinerBumping at 18:26