Previously, on MinerBumping... Agent Zopiclone was spicing up the Verge Vendor region when she ran into Lu'Inda, who accused her of picking on newbies. In fact, Lu'Inda had logged more than 8 years in the game. But that didn't stop the miner from mining in highsec with a fail-fit Retriever. Zopiclone helped the miner to the best of her ability, and then moved on. 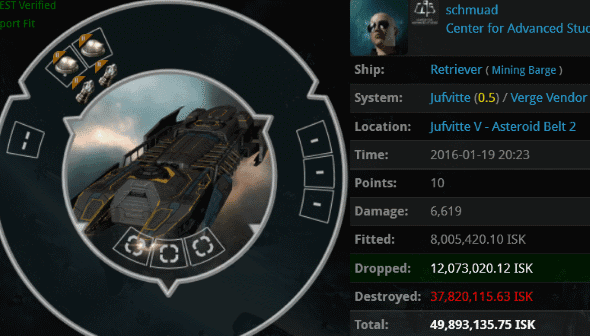 A few weeks later, Zopiclone was astounded by another bot-aspirant Retriever, which was "unfit" in more ways than one. Clearly, this was a newbie in need of help.

The miner returned to his keyboard several minutes later. His message, which indicated a lack of awareness of the Code, seemed to confirm the idea that he was a new player in distress. Zopiclone opened a channel.

Despite the miner's insults, Zopiclone decided to give him a little isk to help him buy a shuttle.

Clearly, schmuad was in over his head. Zopiclone worried that the miner would quit EVE before he had the chance to ascend the learning cliff. 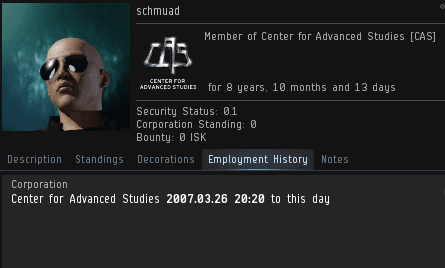 Upon looking up schmuad's employment history, our Agent gasped. This miner had been playing EVE for over 8 years, too!

schmuad was a denialist. The idea that the Code doesn't exist and has no impact on EVE is a powerful delusion. Miners can stew in the ashes of their ships and still fail to understand the truth.

Zopiclone tossed the miner a lifeline. He could at least claim he'd returned to EVE after an 8+ year absence or something. schmuad wasn't interested.

schmuad started getting topical. When you think about it, miners without permits are not unlike refugees. They aren't yet at home in highsec. They find our customs and our Code bewildering. And yes, there are some Goofuses among them. That's why we need Agents, to keep order.

MinerBumping is enjoyed by audiences of all ages. Some might say it's too sophisticated for children, that it needs to be dumbed-down and simplified for their consumption. But children appreciate MinerBumping precisely because it does not talk down to them.

This is what an EVE player looks like after 8 years of AFK mining in the asteroid belts of highsec.

After the end of the convo, schmuad sent another EVEmail. If he was making any progress, it was taking place too slowly to be perceptible. A few days later, Zopiclone ganked schmuad again. He was in the same system with the same kind of unfit Retriever. His journey was a long one indeed. schmuad might end up being among the final miners to embrace the Code.
Posted by MinerBumping at 18:54