A Fateful Encounter in Poinen

The battle for hearts and minds rages in highsec. And nowhere is the battle hotter than in the local channels of random highsec systems. Once virtually silent outside of the trade hubs, highsec local channels are now a place where players' fates and destinies can be decided forever--all in a matter of minutes. 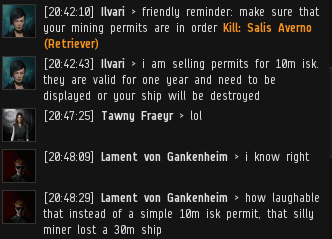 Agents of the New Order feature prominently in local chat. This is only fitting, since it is the Agents who breathed life into highsec local channels for the first time in EVE history. But carebears also lurk there.

After winning an argument against carebear Tawny Fraeyr, Agent Lament von Gankenheim continued to go about his business in the Poinen system. Then a random player wandered into the system and typed a greeting in local. What sort of player was this? Lament was ready for anything.

Senior Coconut was a clueless newbie. His character had been rolled less than an hour earlier. All he knew how to do was go to a system and type in local. He was completely at the mercy of whatever players might happen to see his message.

Thank goodness an Agent of the New Order was there. 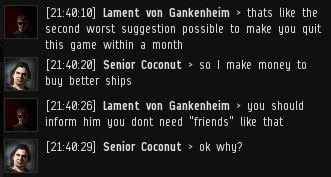 Senior Coconut was somewhat taken aback by Lament, who challenged every preconceived notion the newbie had about EVE. 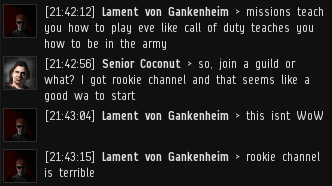 Senior Coconut had been well on his way to a disastrous and unsatisfying EVE experience. He seemed destined for an early account cancellation. Then Lament von Gankenheim walked into his life.

Nothing could be taken for granted; this newbie was a blank slate. Lament took it upon himself to write a new destiny for Senior Coconut. 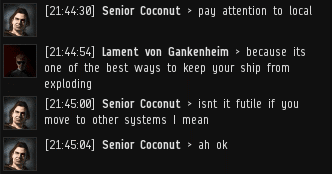 Slowly but surely, our Agent guided the new player away from the abyss.

A close call: The anti-Code carebear from earlier popped her head into local. Imagine if it had been she, and not our Agent, who had made first contact with Senior Coconut? 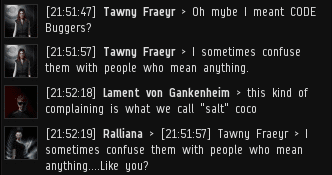 Tawny wanted to poison the newbie's mind. Agents Lament and Ralliana fought back. They would not allow Senior Coconut to be carried away like a lamb led to the slaughter. 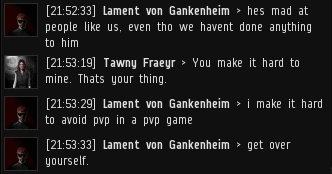 If Tawny had gotten to Senior Coconut first, he might've become a highsec miner. Now he had a fighting chance. 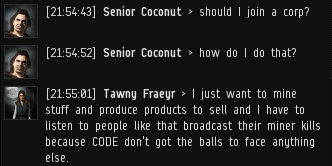 The newbie could only watch the argument unfold. He still needed help. Who would be the one to offer it to him? The Agent or the carebear? Hint: It wouldn't be the carebear. Tawny was too busy nursing her grudge against CODE. to give any thought to aiding Senior Coconut.

Lament wrapped up things up by winning the argument against Tawny and her philosophy of bot-aspirancy. Now he was free to throw a lifeline to the newbie. 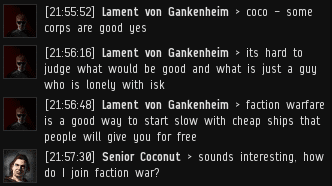 Our Agent helped Senior Coconut dodge another bullet by warning him away from random "newbie friendly" highsec corps. Lament showed him that there was another way. 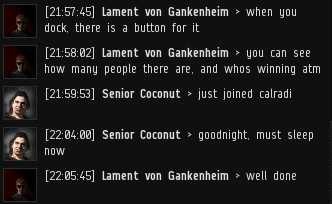 And so it was that a new player joined faction warfare instead of resigning himself to a life of bot-aspirant drudgery. Senior Coconut's entire future changed in an instant, his dismal fate replaced by brilliant possibilities. This, too, is the power of the Code.
Posted by MinerBumping at 17:52