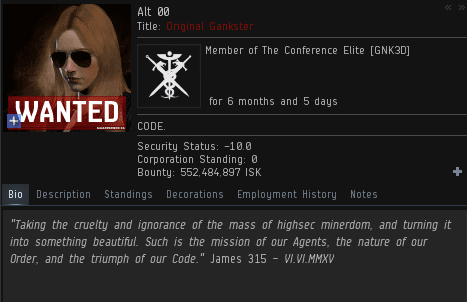 Who fights for highsec? Who stands up for the little guy? We do. The New Order's Agents are the only ones willing to oppose bullying, oppression, and all the sorts of abuses players might encounter in highsec. So when Alt 00 witnessed a scammer trying to take advantage of people in the Hek system, she couldn't remain silent. 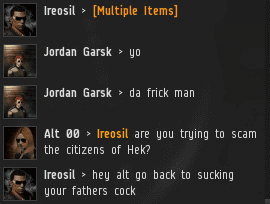 In doing so, Alt 00 drew Ireosil's ire. He fired back, secure in the knowledge that he was absolutely safe from retribution. Ireosil plied his trade in the local chat window; you can't gank chat. Our Agent was powerless to stop him. Or was she?

Ireosil was vulnerable after all: He was mining in an asteroid belt in Hek the whole time--which Alt 00 knew from the start. The CODE always wins. Always. 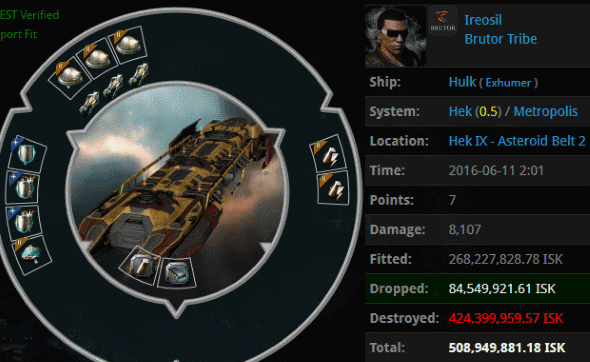 Naturally, the scammer's Hulk was blingy and fail-fit. To be clear, scamming is emergent gameplay and allowed in EVE. Indeed, EVE's de facto origin story is the tale of the Guiding Hand Social Club's famous heist/awox. However, as Ireosil was illegally mining, the items in Ireosil's contract were tainted. Thus, his contract was deemed a scam of the kind not permitted under the Code--regardless of whether the contract was otherwise legitimate. 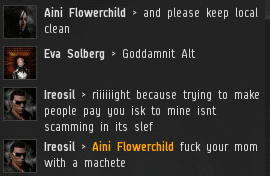 Ireosil's subsequent behavior confirmed Alt 00's preliminary finding that he was a Goofus. 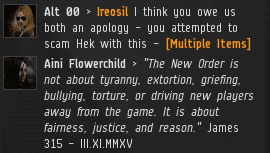 Alt 00 and fellow ganker Aini Flowerchild sent the entire Hek system an important message. But would it be received? Would they accept the New Order Agents as their champions?

But Ireosil, too, was making a play for Hek's hearts and minds. 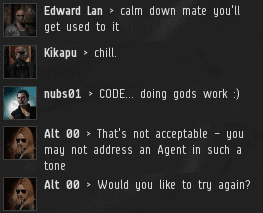 When the locals began to speak up, the consensus was clear as crystal: The New Order won the day.

The rebels and skeptics take for granted that the New Order is hated by highsec. Some of our enemies even think that ordinary players appreciate the Anti-Gankers' efforts--unsuccessful as they are. In reality, the best way to convince a random EVE player that we're the good guys is to let them watch our Agents in action. The second best way: Let them watch our enemies in action. 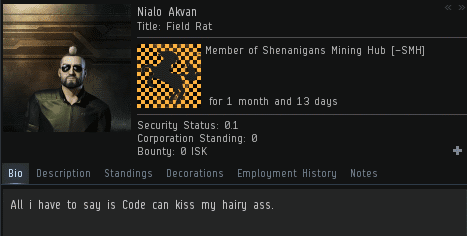 Even so, there was a snake lurking in Hek. A ringer, you might say. Nialo Akvan prepared an attempt to turn public opinion against the New Order. 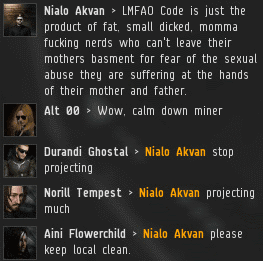 Each day, our hold on highsec grows stronger. Our Agents are forming unbreakable bonds with its people. If you haven't declared your support for the New Order, it's time to get off the fence and join the winning team!
Posted by MinerBumping at 17:56