The Search for Intelligent Life, Part 1

Every Agent of the New Order is a master of multiple crafts. Among other things, our Agents are explorers. They search highsec for signs of intelligent life. The most intelligent players in highsec are recruited into the New Order and trained to become Agents themselves. Each gank is a signal, if you will, sent out into the darkness. Our Agents eagerly await a response.

Intelligent life isn't as common in highsec as you might think. However, some carebears write angry EVEmails only in the heat of passion. They might send a follow-up EVEmail a few minutes later, after cooling down.

...But a calm Goofus is still a Goofus. 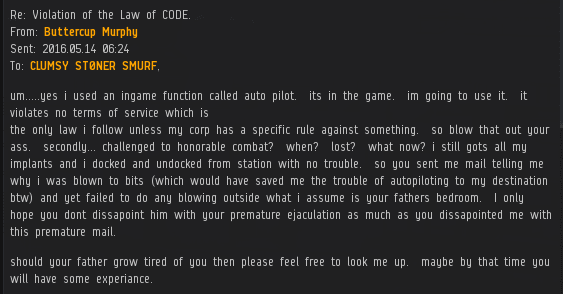 Vrix Nation is a corporation in CODE., the most elite PvP alliance in EVE today. Agents in Vrix Nation specialize in educating highsec dwellers about the perils of autopiloting--and the pleasures of Code compliance. 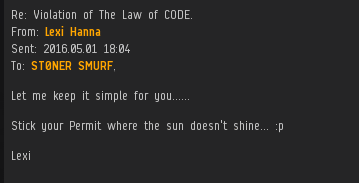 As the population of autopiloters has dwindled, the number of multi-gank recipients has increased. How many ganks does it take to teach someone not to indulge in a bot-aspirant lifestyle?

Even weeks after being ganked, some carebears send progress reports. Even if the report indicates an absence of progress, it's still a useful report.

Enigo Montoyya belonged to the "follow-up EVEmail" breed. First he tried to pretend that he didn't care he'd been ganked. Thinking better of it, he played the Hitler card.

Miner gankers are familiar with the "I wasn't AFK, I was just..." type excuses. Autopiloters have their own versions.

It's inevitable that among the many thousands of autopiloters ganked, some will genuinely be newbies. Sygma Andrard protested that he'd only been playing EVE for a week. Did CODE. finally drive away a new player? 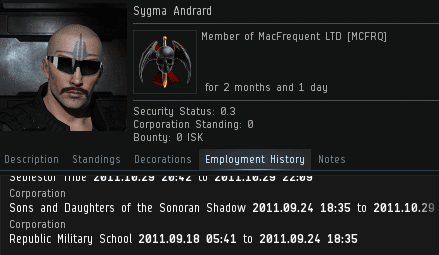 A week... Four and a half years... Whatever. For carebears, truth is worth less than isk.

Then there are the "returning" players. Skinnard has been playing EVE off and on for the last seven years. He wasn't a newbie, but he was a "fresh returning player". Imagine going to the supermarket and being sold fresh returning produce from seven years ago. Yuck!

Skinnard changed his tune. The fresh returning player with nothing became a serious PvP threat less than an hour later. Hazards such as Skinnard faced our heroes in Vrix Nation as they continued their search for signs of intelligent life.