Players should get flagged for engaging in passive-aggressive activities, too. Welcome to the latest edition of the Highsec Miner Grab Bag!

Our Agents have experimented with a lot of different methods. So far, though, there's no surefire way to make a miner calm down.

As accommodating as we are, the miners act as if the requirements of highsec conduct are unreasonable.

Carebears don't just haul in-game items; they bring their personal baggage into the game, as well.

I've never met a highsec miner who actually had any powerful friends. Excepting, of course, the Agents of the New Order, who are the miners' only true friends.

John Ralar claimed to know who the bad guys are in EVE. Then he identified the New Order as the bad guys. Facepalm!

John further complained that he couldn't "make a cigarette" without being ganked. I wonder what kind of cigarette he was talking about? Miners, that's not why it's called "highsec".

Miners whine about being ganked for "no reason", but they only get even more irritable when they're told about the reasons.

Carebears are always moving the goalposts. First they say that ganking doesn't count as PvP. Then they say it's not "the good old PvP".

Aristoden Vishnu's message was slightly garbled, since it was filtered through Google Translate. The sentiments expressed in the original EVEmail made it through mostly intact. It doesn't always work that smoothly.

Agent Eva Mavas took one look at Ant Alidar's EVEmail and knew that Google Translate was going to have trouble with it. Our Agent wasn't wrong: 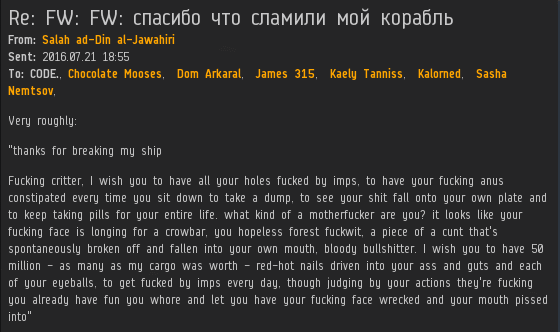 If only the Russians put as much effort into their Mackinaw fits as they put into their tearmails! 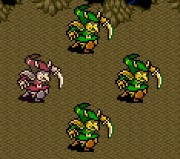 In case you were curious, I believe these are the Imps that the Russian miner was referring to.

Those sound like the actions of a genuine Agent to me. One thing, though: Please don't assume that your son "isn't a PvP type". Let the boy decide for himself whether he wants to leave the carebear life behind. I bet he does.
Posted by MinerBumping at 18:37