It's Easy As ABC

...but with a twist. You'll note that the sender of this message was not the Saviour of Highsec, but an Agent of the New Order. 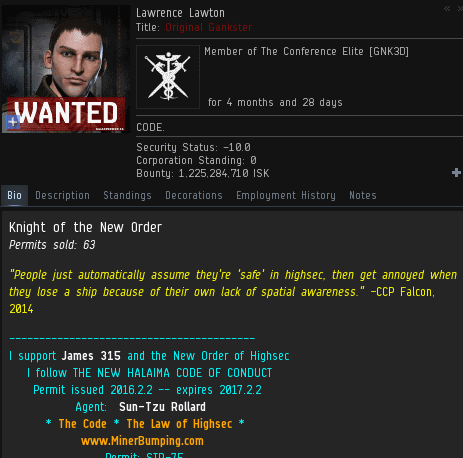 Lawrence Lawton has pledged to enforce the Code in highsec by any means necessary. Wardecs continue to be one of the tools at our disposal--despite all the efforts of the carebears to remove wardecs from the game.

Agent Lawrence received a disturbing report about Code violations being conducted by members of ABC Mining corp. Rather than requesting the expulsion of one of the corp's members, Lawrence demanded total compliance.

CEO Captin Petra adamantly refused. She'd pay the 120 million isk fine and add a declaration of support to her corp description, but drew the line at altering any of her characters' bios.

No deal. The highsec of the future is built upon Code compliance, not Code compromise. There's no negotiating with bot-aspirancy.

Agent Lawrence made his demands as unambiguous as possible.

Captin Petra must've gone pale when she read this EVEmail. The next time both Petra and Lawrence were online, Petra requested a private convo.

Our Agents are tough, but fair--and helpful. Lawrence taught Captin Petra how to change her corp description. When CCP fails to teach the miners, the New Order steps in.

Captin Petra wasn't wild about changing all of her character bios. And she certainly wasn't excited about being told what ships she was allowed to fly. But as long as Lawrence had a good reason for it, maybe it wouldn't be so bad.

Amusingly, all of the references to "Gallants" led Captin Petra to ask if CODE. is only active in Gallente space.

The story had a happy ending. The CODE always wins. Always.

Agent Lawrence and the CEO of ABC Mining were able to come together and find a way that both parties could be satisfied. Which is to say, Captin Petra agreed to do everything Lawrence told her. 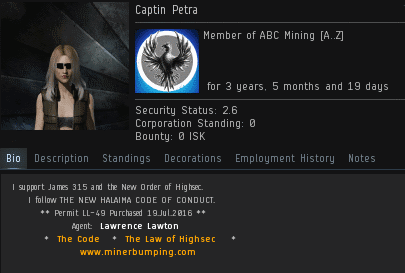 I noticed that the text in Captin's bio was a bit on the small side. I'd hate to see her lose some mining ships because our Agents couldn't read it, but if that happens, she can always increase the text size and apologize to the ganker.

The rebels and skeptics call us griefers. Nothing could be further from the truth. We're peacemakers and peacekeepers. A little compliance today will save a miner from a lot of grief tomorrow.
Posted by MinerBumping at 18:14