An Agent's Life for Me

The bots and bot-aspirants try to glide through EVE and make as little impact on other players as possible. The Agents of the New Order, on the other hand, know that an EVE career's worth is not to be measured in isk. It's to be measured by the number of people's lives it has enriched.

Agent Aaaarrgg has delivered content to so many. This week, he reached a milestone: 15,000 kills. 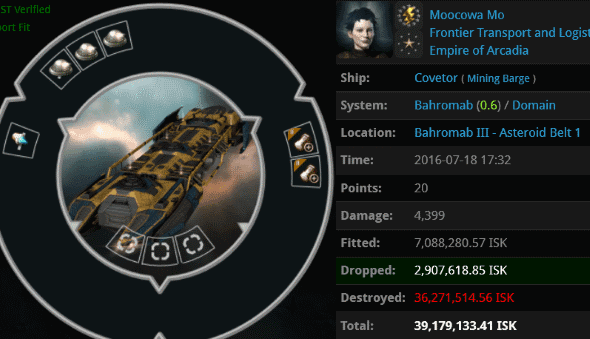 For his fifteen thousandth kill, Aaaarrgg destroyed one of the most pitiful of mining vessels: an anti-tanked Covetor.

The owner of the freshly salted wreck was Moocowa Mo. She'd been given content by Agents before--including Aaaarrgg himself.

As he was celebrating his 15,000th kill, Aaaarrgg was feeling especially generous. He even tossed the miner some isk.

Then came the true generosity. He introduced Moocowa to the Saviour of Highsec and the Code.

Despite having been ganked by CODE. before, Moocowa didn't yet fully understand the implications of its existence. This is why we don't give up on a miner after the first gank. Everyone learns at his or her own pace. But fast or slow, in the end they must all learn the same thing.

The miner, too, was in a festive mood. She'd lost a mining barge, but Aaaarrgg's enthusiasm was particularly infectious on this day. Moocowa left local chat and initiated a private convo with Aaaarrgg so she could learn how to buy a permit. 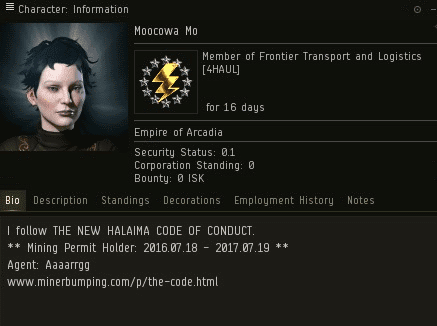 Now she had something of her own to celebrate.

The Agent retained another EVE player. Who knows how much subscription revenue CCP owes directly to Aaaarrgg?

But while Aaaarrgg was conversing with Moocowa in private, the miners in local were getting restless. After selling a mining permit to Moocowa, our Agent returned to deal with them.

Miners are frequently demoralized to learn that CCP's vision of EVE has a lot more in common with the New Order's than with their own. (At least when it comes to CCP's marketing department.)

Carebear apologist Paul Hauls conceded the New Order's legitimacy under the EULA, the game mechanics, and CCP's philosophy. He appealed instead to the Agent's own conscience. What kind of man did Aaaarrgg want to be? 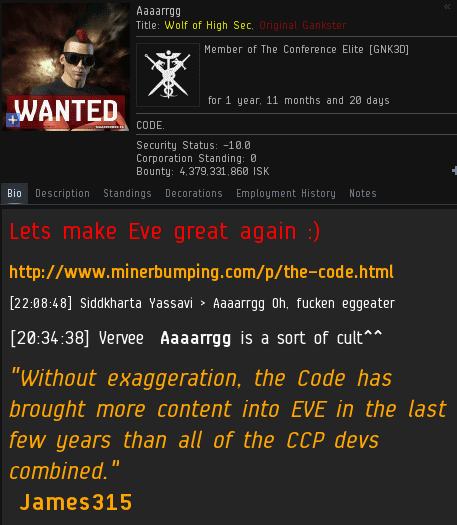 The choice was easy. His was the life of a New Order Agent.
Posted by MinerBumping at 18:07