The Search for Intelligent Life, Part 2

CODE. corporation Vrix Nation was tasked with the discovery of pockets of intelligence in highsec--from which could be drawn future Agents of the New Order. Vrix Nation sent "pings" across highsec in the form of autopiloter ganks. So far, however, they had only confirmed the presence of a vast reservoir of carebearism.

Undaunted, our heroes continued in their mission.

Carebears are easily perturbed, even by the most trivial of inconveniences. And the slightest interaction with their fellow EVE players makes them grouchy--the effect of rousing them from their bot-aspirant slumber.

Saving highsec is no easy thing. The carebears freely admit that they don't even like highsec.

Our Agents are the bearers of both law and truth. The carebear instinct is to cling to ignorance. For example, Wid0wmaker accepted as fact a wild rumor from Reddit earlier this year that claimed CODE. had disbanded. All the upvotes in the world couldn't make it true, but carebears were fooled anyway.

Even Reddit reported this week that CCP's own statistics reflect a happy, healthy CODE. The statistics proved to be a huge embarrassment for critics of CODE.--and an admission of catastrophic defeat for the Anti-Gankers, who have pledged to prevent CODE. from getting kills in highsec.

Time and again, CODE. has proven to be the most relevant alliance in EVE today; everybody cares about our "shit".

Our Agents quickly concluded that although their study couldn't rule out the possibility of intelligent life among the autopiloters, they were confident that if it did exist, it wasn't common. The autopiloters seemed to be frustrated.

Some autopiloters proved to be hostile, which was not surprising.

One of the key ingredients to the New Order's success is our persistence. At the moment when anyone else would give up all hope, our Agents press forward. 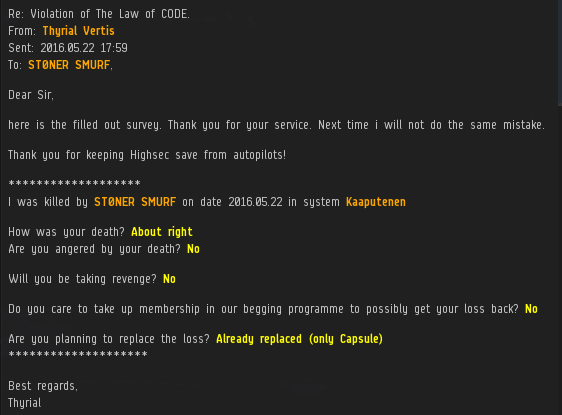 A positive result: Autopiloters were capable of completing a survey--and admitting the justice of their ganks! 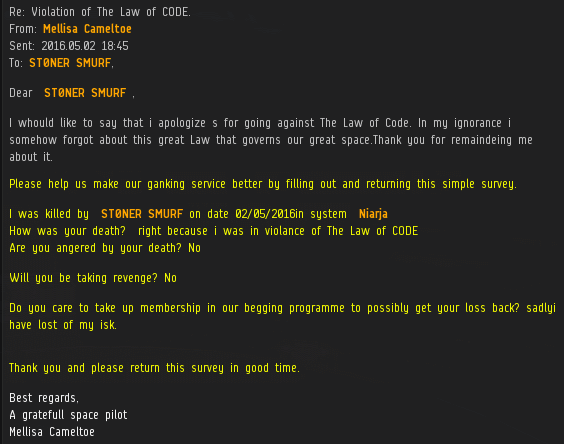 The truth is, there's a craving for the Code in highsec, yes, among the Code violators, too. Even those who appear to be our sworn enemies are waiting to be helped. Thanks to the superlative qualities of our Agents, they'll get it.
Posted by MinerBumping at 17:28