Highsec miners don't always show proper respect or appreciation toward the Agents of the New Order. But when there's trouble in highsec, where else can those miners turn? 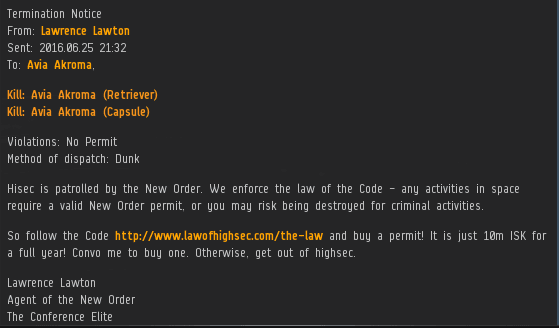 Encouragingly, the miner expressed an interest in buying a permit from Agent Lawrence. However, it would also probably be fair to say that she sent him mixed signals.

Plot twist: The miner asked to buy a permit, but the Agent refused. Had the world turned upside down?

In what might be a first, a miner made real life death threats to an Agent because he wouldn't sell her a mining permit.

A lot of highsec miners are a bit rough around the edges, but Avia Akroma's attitude seemed especially unpromising. That didn't mean Lawrence would write her off completely, though. "No miner left behind." Our Agents take these words seriously.

Lawrence concluded by listing the steps necessary for Avia to join the fold. It would've been far easier for Avia if she'd simply bought a permit in the first place. Now she would need to walk a more difficult path.

Another plot twist! By this point, Avia had already contacted Agent Liek DarZ and purchased a mining permit from him. Avia drew the line at buying a permit from Lawrence. Paradoxically, Avia sent Lawrence 30 million isk to cover the Red Pen fee, plus an additional 20 million isk for no apparent reason.

Our Agents always act in perfect harmony with one another. The New Order is so well-organized and coordinated that it would make any bureaucracy in the world tremble with envy. Lawrence made sure Liek DarZ got looped in and updated everyone involved as to Avia's progress.

Avia bared her soul and sent apologies to the Saviour of Highsec and Agent Lawrence.

Lawrence was satisfied that the requirements for permit ownership had been met. 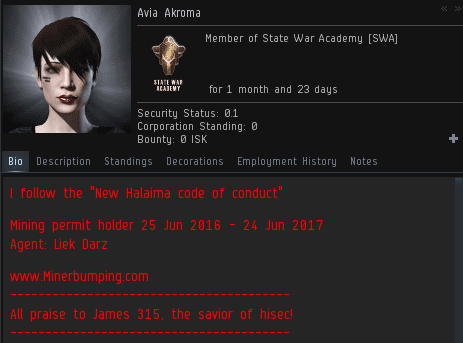 Who would've imagined, when reading Avia's first few EVEmails, that she would become Code-compliant? Our Agents did. And they manifested their dream into reality. They didn't leave Avia Akroma behind.

Agent Liek DarZ was deeply impressed. By the time he'd logged in, the New Order had already won a great victory. Avia's transformation was startling--but in a way, expected. The CODE always wins. Always!
Posted by MinerBumping at 17:41