A Nice Talk About the Code

It is perhaps the case that no one else in all of EVE receives more personal correspondence than I do. Hey, I'm the Saviour of Highsec--it goes with the job. Also, relevance!

A not-insignificant portion of that mail concerns the Code. There are basically three kinds of EVEmails that I get about the Code. The good, the bad, and...

Nearly a year ago, Mesaron Missilemaster sent me a lengthy EVEmail with several questions about the nature of the Code. Whenever conveniently practical, I answer such questions. It looks like Mr. Missilemaster has concluded the preamble to his message, so let's get to work!

So far, so good. No questions have been asked yet, but quoting the Code and responding "it's true" is a good way to start.

This is where things begin to fall apart. Mesaron Missilemaster expects miners to behave like spoiled children. As apt as the comparison may be, we require more from our miners. They're playing a spaceship-shooting game and have no right to misbehave simply because their spaceship was shot. Players type "gg" immediately after a round of an FPS game ends. We don't expect them to rant and rave like madmen if they're on the losing team. We don't expect them to take a day or two to cool off before they can say "gg".

I fundamentally disagree with those who, like Mr. Missilemaster, urge patience. We can't wait for generations of slow, gradual change. Highsec has already waited far too long. The fierce urgency of now dictates that the time for Code compliance is already upon us.

It's a myth that highsec mining is a necessary evil. All the ore we need can be acquired from miners operating outside of highsec. We can also draw upon materials from NPC drops and the wrecks of the countless player-owned ships that have already been built. 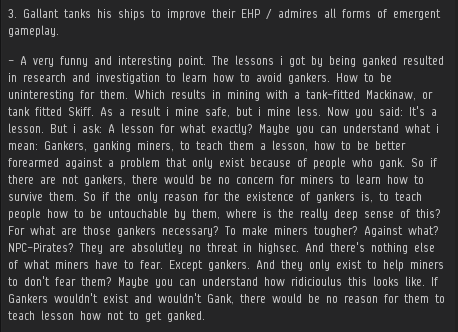 Miner ganking teaches miners important lessons that go beyond learning about miner gankers. It teaches miners about the essence of EVE itself. For example, the adage, "Don't fly what you can't afford to lose." This is as applicable--or more so--to those engaged in lowsec combat. I could go on in this vein, but I think you get the idea.

I'll add that the whole concept of "If gankers didn't gank..." approaches things from the wrong direction. Gankers have more right to gank than miners have to mine. EVE is a PvP game; without PvP, there would be no content and no purpose for the game to exist. 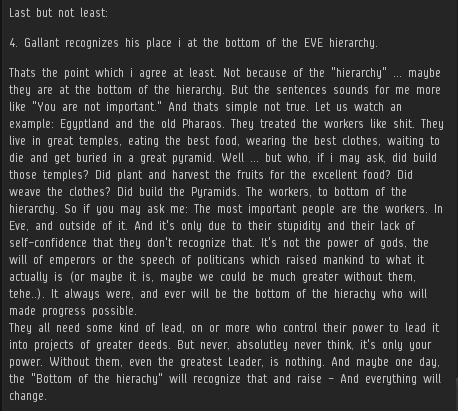 Actually, as we've seen, highsec miners are unnecessary. As such, they aren't comparable to the builders, weavers, farmers, etc. However, highsec miners do serve a function (only) insofar as they provide an opportunity for PvP'ers to generate content by attacking them. Ironically, the carebears beg CCP to stop the very people who make their existence worthwhile. This is why they are called Goofuses.

Mesaron Missilemaster, I sincerely hope today's post answered your questions and enriched your understanding of the Code. I know it was worth the wait. If you're still playing EVE, I hope you'll write again.
Posted by MinerBumping at 19:36