What does it take to become a celebrity in highsec?

Hard work, and the Code. Agent Kalorned is known for his close, almost fatherly involvement in the lives of the miners under his care. And, of course, his actions personify all the good qualities of the Code.

The @NewOrderGamis Twitter feed helps keep everyone in the Gamis area up to date on what's happening there. It's a busy place!

Even after four years of the Code, many miners still believe miner bumping is against the rules. Is there another version of the EULA they're all reading? Maybe you can find it published on the same website where they get a version of the Code that requires Agents to check for AFK status before ganking an unlicensed miner. 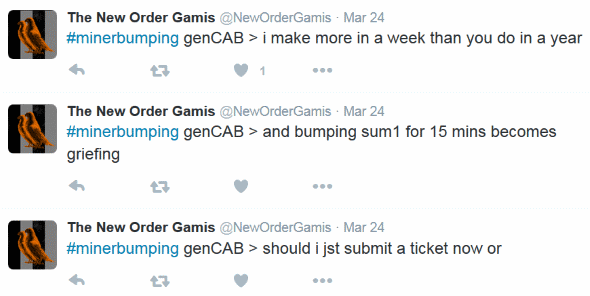 It's amazing that a miner would put his faith in some flimsy support ticket rather than the Code.

Highsec miners are famous for their hypocrisy. We're accused of being too chicken to PvP--by the same people who file petitions and whine to CCP for more safety from PvP. 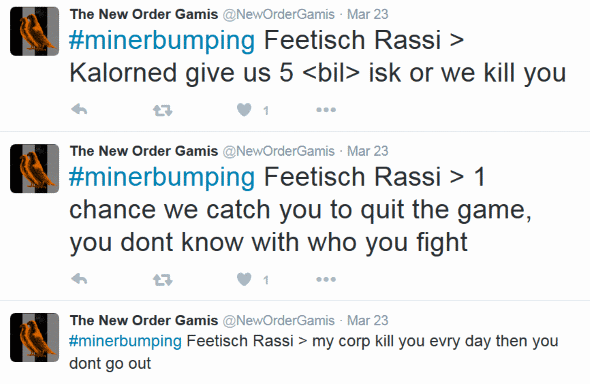 When CCP fails to protect the carebears, some fight back. I suppose, to be fair, they mostly only threaten to fight back. 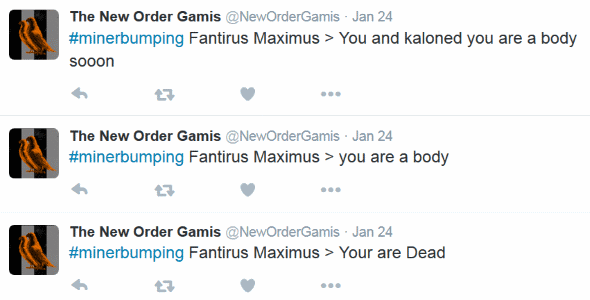 Agent Kalorned faces down his enemies with total fearlessness. 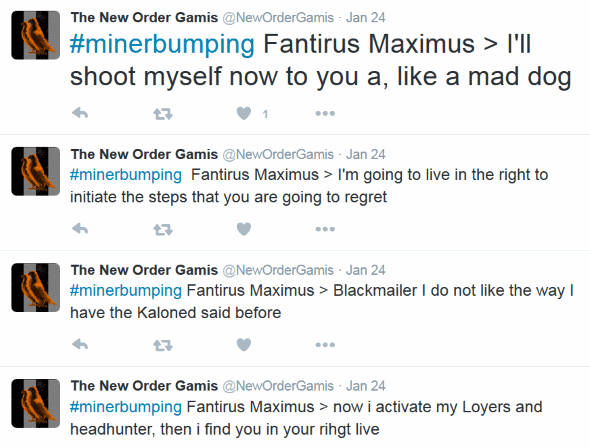 ...Or fearlessness mixed with amusement.

There's no telling what alliance Juvial Solstice enlisted to his cause. The New Order remains on a war footing.

When mystery friends from nullsec fail to deliver, the carebears resort to negotiation and complaints about the Code. Next time, tell your wife that you need to dock your mining ship before you can help her transport her cargo.

Others have more selfish reasons for going AFK. For reference, the New Order Loo Protocol.

Supposedly EVE has trouble attracting new players these days, but the number of people who whine about being a new player has increased tenfold. 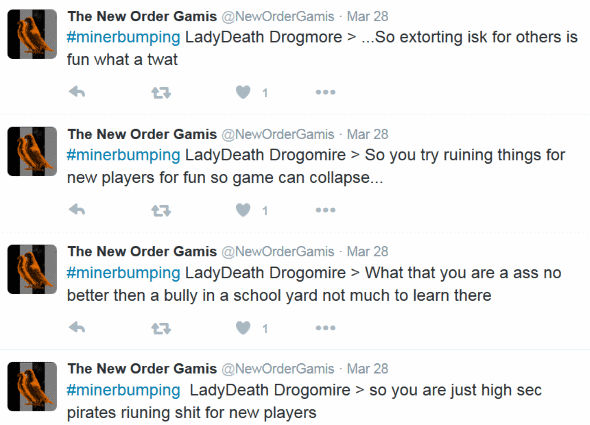 "Bumping? That won't do anything." becomes "You're making the game collapse." My, how we've grown.

At the end of each day's patrol, Kalorned has the satisfaction of knowing he's made a difference--and that when he next returns to Gamis, the family of local miners will greet him by name.
Posted by MinerBumping at 20:03