What aspect of EVE does a carebear think is as bad as slavery? You might suppose the answer is ganking, bumping, wardeccing, or something along those lines...

...Bonus points to those who guessed the continued presence of the New Order's IPO thread in the Market Discussions subforum. The legacy of Fin Udan lives on. 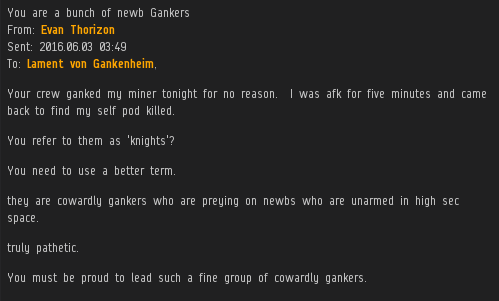 I don't know if it would make Evan Thorizon feel any better, but we also refer to them as "Agents", which is a more general term also encompassing those who perform non-ganking activities for the Code.

Highsec miners have trouble accepting responsibility. "I wasn't AFK. It was my toddler's fault." Thanks, dad.

Although we celebrate the diversity of the highsec population, it can make reading tearmails difficult.

Luckily, our Agents are also drawn from a diverse population. 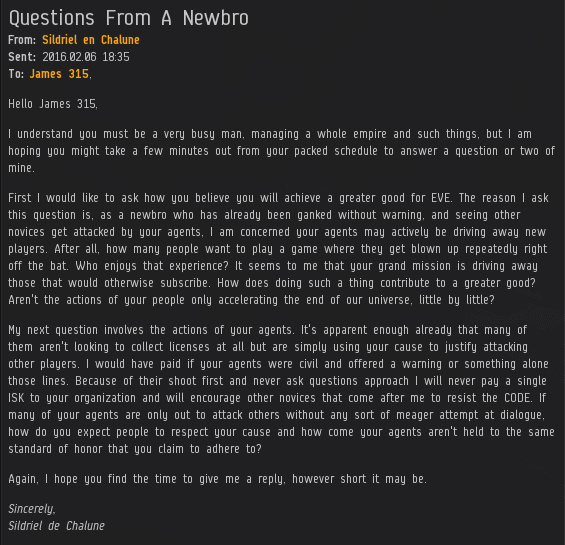 The life of an Agent is indeed simple, though "simplified" might be the better word. All of the nonsense, noise, chaos, and confusion is removed from their minds once they align their thoughts with the Code. As for misery, that remains the exclusive possession of the carebears. 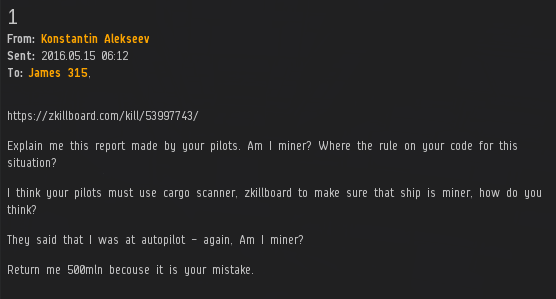 "Bot-aspirant behavior is not permitted." It's amazing to me how many carebears manage to ignore that when reading the Code. Apparently that provision was written in invisible ink.

Agent Snigie Audanie received the shock of his life when a miner informed him that the New Order no longer ganks miners.

Snigie didn't need to worry about Glivo's intel, though. He had the Code to guide him.

Actually, Lance a'Lot's questions could be turned against his fellow miners. When they ask why they get ganked or need a mining permit, one could ask them, "The Code? James 315's vision for highsec? Ring a bell? Watch the news?" 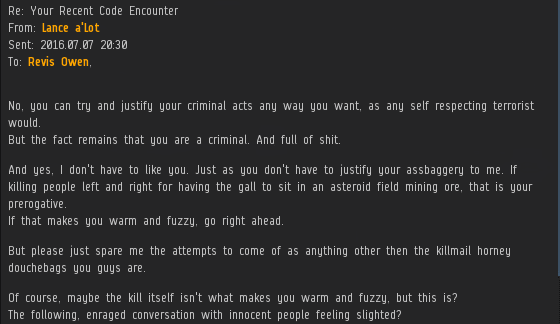 Innocent people don't rage at our Agents. Guilty ones, on the other hand...

Score another heart and mind for the New Order of Highsec.
Posted by MinerBumping at 18:07