The Birth of Civilization, Part 3

Previously, on MinerBumping... Agent Kalorned brought the Code to Abudban, and with it, the promise of peace and security for all who reside there. Sadly, the tendrils of bot-aspirancy all but strangled the local population, who responded to Kalorned with profanity and insults--and treacherous attacks. One after the other, Kalorned defeated his attackers. But then a deadly assassin came upon him with a Thrasher. 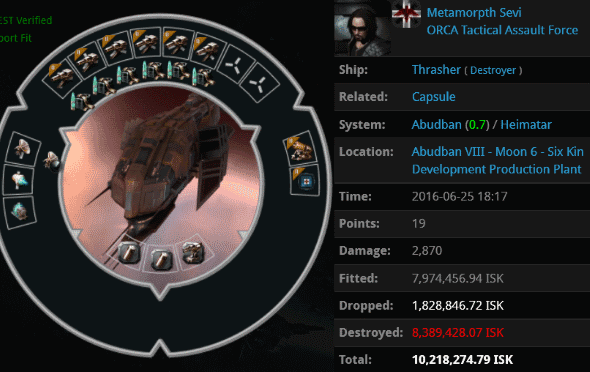 As you'd expect, the Thrasher died. It was no match for Kalorned's Orthrus--or his Code.

Rays of sunshine pierced the dark clouds of Abudban. The Thrasher pilot didn't rage. He even left a "gg" in local.

Despite being accused of "griefing", our Agents are always encouraging to others.

In the wake of his great triumph, Kalorned wrote down his thoughts: There seem to be some reverberating ebbs of violent resistance still in the system. I dispatched the Thrasher, he was a good lad, confused and misguided, but a good lad none the less, took his loss in stride. Perhaps my outreach to him will encourage him to leave his life of poverty and go on to succeed in this big universe. I just finished talking with Metamorpth, and it seems now I have another small fire in local to attend to...


Selnin > hypocrits who say one thing but actions say the opposite.
Kalorned > I'm sure you have a wealth of proof for that statement
Kalorned > It couldn't possibly be 4 threads of heresay
Selnin > tell me one bot/boxer fleet they have hit? none all independent miners

Immediately after Kalorned beat the Thrasher in honourable 1v1 PvP, another agitator began protesting against the New Order in local. There wasn't an ounce of truth to Selnin's propaganda. The New Order has a long history of destroying and disrupting bots. We are to bots what firemen are to fires.


Selnin > yet a guy with fleet of 50 and freighter and they leave the systems
Kalorned > We target bots judiciously
Kalorned > In addition to non-compliant miners
Kalorned > bots or not, all are subject to The Code
JorBrae Regyri > Kalorned preach the truth, brother.

Now I'm being accused of being a hypocrite, the tragedy of it all. I may have let my internal monologue get the better of me, I accidentally allowed a slip of sarcasm out, very unprofessional of me. I have to remember to remain professional at all times. The miners may not realize it, but it’s one of the best subconscious tools I have in helping them.


Selnin > Tell me then one bot fleet? show me the kill mails. There arent any as your CODE is nothing but hypocritical trash.
Kalorned > The onus of proof is not on me, I'm not the one making wild accusations
Kalorned > It's up to you to prove your statement
Kalorned > You can't redirect that and have me do your research work for you
Selnin > the lack of such is all the proof there is.

As usual, the rebel didn't bother to produce any evidence of his claims. This was only natural: Had he bothered to do any research, he would've debunked his own story.


Kalorned > The guilty until innocent position, excellent
Kalorned > High Sec would be way better of run by someone like you, I'm sure
Selnin > Dont need any more then the fact that there is no bot fleet ever hit by Code
JorBrae Regyri > Selnin so where's your proof?
Selnin > The proof is the fact there are no kills on botters. All you kill are rookie and young miners just starting.

Another accusation: The New Order only kills "rookie and young miners just starting". No doubt this group includes the newbie freighter pilots and the 10-year EVE players who claim to be new to the game.


Selnin > How can you say you are anti botter when there are no kill except on newer toons.
Kalorned > I'm not about to go pull bot kills for you, why should I have to defend against baseless accusation? Again, the burden of proof is on you as the accuser
JorBrae Regyri > Selnin how can you prove that none of his kills are bots? How would one prove that definitively?
Selnin > exactly you are hypocritical. You say anti botter but that is furthest from the truth, as you just said. You wont kill bots.

I said no such thing... but this man is clearly not interested in a reasoned and logical debate. When you begin your argument from a perspective of guilty until proven innocent I suppose there's not much that can be done debate-wise.


Selnin > Just wait til the Of many and Poeka fleets get back around here, they clean out systems in about 4 hours and usually you watch the codettes disappear as soon as they arrive.
JorBrae Regyri > I support CODE as I have seen a marked increase in available ore for me to actively mine. Without them belts are emptied by bots and AFKers.
JorBrae Regyri > Me thinks that he who argues most uses said techniques and doesn't like being caught by the "police". Don't the "crime" if you can't do the time.
Metamorpth Sevi > i do think u r using scripts with your alts
Kalorned > Metamorpth Sevi you are incorrect - but again I do enjoy listening to wild conspiracy theories

Sadly, even the Thrasher pilot got caught up in the paranoia. He accused Kalorned of using bot scripts to control his ganker alts. Kalorned could only shake his head. If the carebears couldn't be convinced by his words, he'd need to persuade them with his actions. Kalorned valiantly struck at a pair of AFK miners in system.

Such was the cynicism of Abudban that the locals only sneered. Was there any hope at all for Abudban?