Our Agents have achieved mastery of every kind of highsec combat situation you can think of. We hold the initiative. The enemies of the New Order cannot dictate the terms of engagement; battles only occur at a time and place of our own choosing.

...Some rebels haven't figured out what this means. It's time for another series of miscellaneous lessons about highsec life from the Highsec Miner Grab Bag!

They say you're supposed to wait 30 minutes after eating before going into a swimming pool. I'd always assumed this was a myth, but perhaps there's something to it. Jojo Gunne's dog shouldn't have gone swimming so soon after eating Jojo's homework. 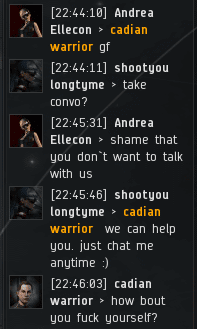 Getting a foot in the door isn't always pretty, but it's worth it.

Roderick Cruz has it wrong: We never delete EVEmails like his. We add them to the miner's permanent record.

I'm told the GMs have been suffering from an extreme backlog of petitions over the past few months. People like InquistorEisenhorn aren't helping matters. The Code used to have a provision cautioning the miners against filing frivolous petitions, but CCP made us remove it. I wonder if they regret that decision?

Marlin en Marland may be a bot-aspirant carebear, but at least he's honest enough not to make up a story about heroically saving orphaned dogs from a burning building or whatever.

"The breasts of the community"? It must get lonely in the highsec asteroid belts.

Another "en Marland" confessed to her crimes. Agent Aaaarrgg set her straight:

People often lose their most expensive ships and implants in highsec. If you wouldn't do it in low/null, don't do it here. I mean, lowsec and nullsec don't even have a Code. We expect better.

It's not uncommon for me to receive EVEmails like this. I've noticed that they tend to be very vague, rarely mentioning specifics of the alleged offenses--or even Agents' names. Is the complaint sincere, or is it a form of concern trolling? The investigation begins: 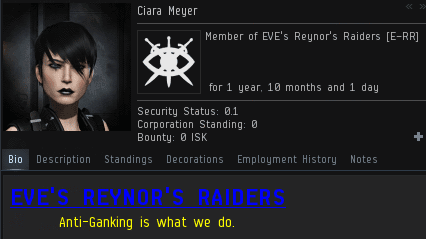 Case closed. Detective work is even easier than they make it look on TV. 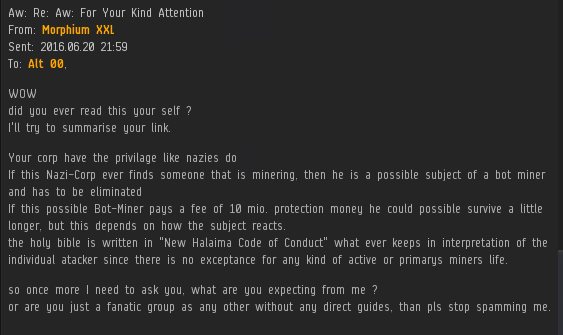 Beware the miner who tries to "summarize" the Code.

I'd like to conclude this edition of the Grab Bag by giving some rare kudos to the Anti-Gankers. We've all had plenty of laughs at the Anti-Gankers' expense from time to time. Their silliness, their ineptitude--it's all in good fun. Rarely do we give them credit. In this instance, Anti-Ganker Stupid Mertie performed a valuable service for the "Gank-Intel" channel by providing an accurate report of what his scout alt witnessed in the Madirmilire system: 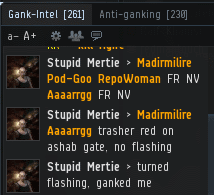 That's some fine intel.
Posted by MinerBumping at 18:46