The Nicest People in EVE

Agents of the New Order are known for having a high degree of curiosity about the world around them. In contrast to the bot-aspirants who cling to rigid routines and avoid interactions with other players, our Agents love to explore EVE and meet new people. They don't ignore the teeming masses of carebears like other players do. Our Agents see a miner and wonder, "I wonder what their story is?" 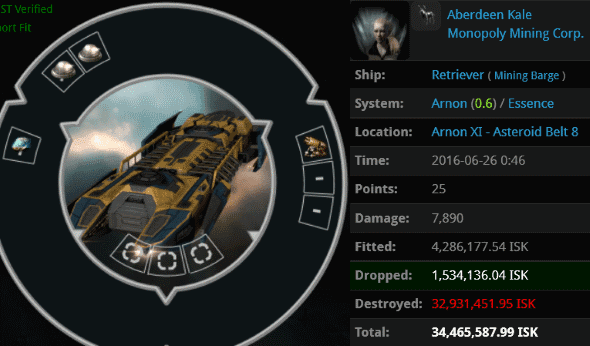 A miner with a peculiar fit silently chewed on rocks in the Arnon system. An Agent spotted the miner and became curious about her. He arranged a meeting by destroying her barge. This is one of the few ways to get a miner to open up and come out of their shell. 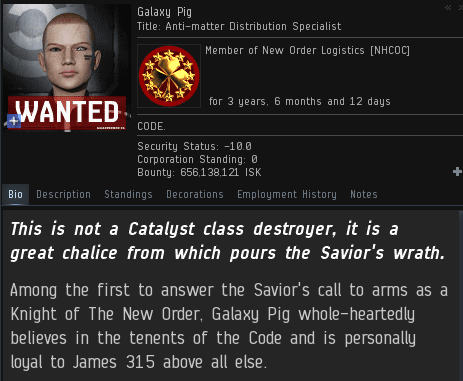 The Agent in question was Galaxy Pig. Despite years of nerfs to highsec content creators, the Retriever was no match for him. The miner was Aberdeen Kale. She'd been in EVE for a few months, but apparently not long enough to put three modules in her ship's lowslots. Or buy a permit, for that matter. Galaxy Pig sent Aberdeen a standard post-gank EVEmail and spiced up her profile by putting a bounty of 315,315 isk on her.

When the miner woke up, she replied to the EVEmail. Aberdeen dismissed the idea of CodeSov.

Although Aberdeen claimed to be new to the game, she acted like she already knew all there was to know about Galaxy Pig. And it was as if she had no interest in connecting with her ganker on a human level.

Galaxy Pig encouraged the miner: As someone who lived in highsec, she was playing in the big leagues.

Aberdeen confessed to bot-aspirancy. In modern highsec, the influence New Order is so pervasive that you pretty much have to stick your head in the sand--and keep it there--to avoid hearing about us. Which is precisely what a bot-aspirant would do.

Aberdeen was baffled by someone who would want to blow up spaceships in EVE. The highsec miner also felt that piracy wasn't ambitious enough. 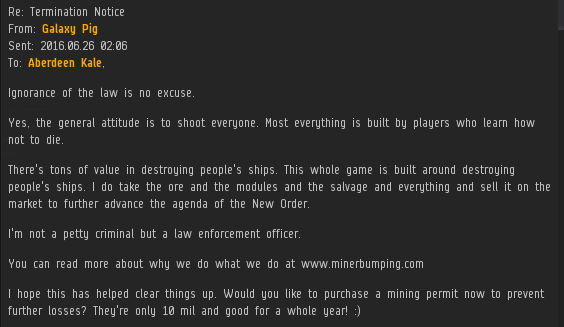 Galaxy Pig's hard work was already paying off. Aberdeen's career in EVE thus far had been solitary, poor, nasty, brutish, and short. Now, for the first time, she expressed the twinkling of an interest in PvP.

Galaxy Pig ignored the sinister undertones in Aberdeen's question and educated the miner about the bounty mechanics.

In the afterglow of a gank, miners are uniquely receptive to adjusting their expectations about EVE. Galaxy Pig helped. 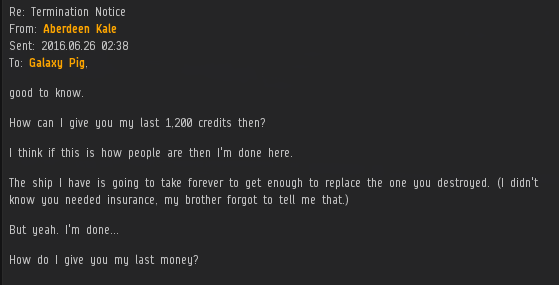 Now it seemed that Aberdeen Kale's EVE career had reached an exciting conclusion. She'd seen more action in the last few hours than she had in the previous 4 months. Appropriately, the miner wanted to reward Galaxy Pig by sending him what remained in her wallet.

Galaxy Pig taught Aberdeen about EVE's mechanics one last time; now she knew how to transfer isk. The isk wasn't enough to purchase a mining permit--or even a single share of New Order stock--but it was enough to allow the miner to end her game on a high note. Our Agents continue to impress.
Posted by MinerBumping at 17:25