The New Order's mission is to save highsec. Everyone's heard it, though the rebels and skeptics don't believe it. Carebears attempt to poison the minds of newbies at the earliest available opportunity. But what happens when the New Order gets to them first? 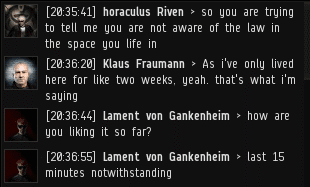 Newbie miner Klaus Fraumann was paid a visit by The New Order Gamis Affiliates and lost his Retriever. It was somewhat tanked, but clearly the miner wasn't enjoying EVE. As the gankers moved on to their next target, Klaus was contacted by two other Agents, Lament von Gankenheim and horaculus Riven. 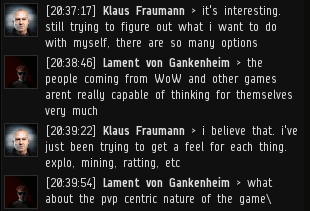 Lament encouraged the miner to share some thoughts about his experience with EVE thus far. Klaus was only too happy to chat. Crowded as highsec is, it was apparently the first time anyone had bothered to speak with him. 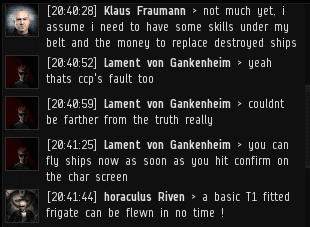 The miner was in bad shape. From what little he'd heard about the game, it was necessary to mine in highsec for an indefinite period before he could get to the fun stuff. 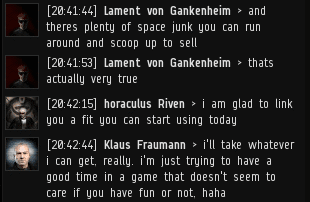 Our Agents offered a different view of EVE--the idea that new players can get into PvP right away. Lament cursed CCP's failure to make newbies aware of this. 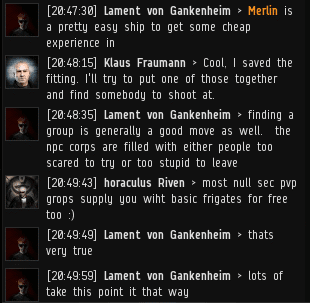 Next, our Agents introduced Klaus to the concept of newbie-friendly organizations that don't require you to mine all day and sell ore at below-Jita prices. 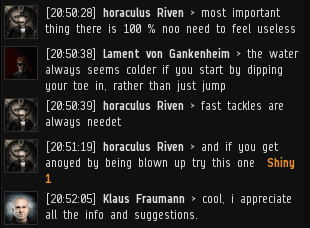 Klaus was impressed. Why hadn't CCP put any of this into the tutorial? 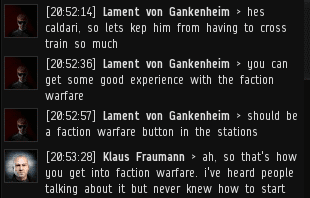 The Anti-Gankers, carebear apologists, and theme parkers wave the banner of the newbie, invoking their interests at every opportunity to justify nerfs to PvP. Yet it was plainly obvious that none of them had bothered to actually help new players do anything. 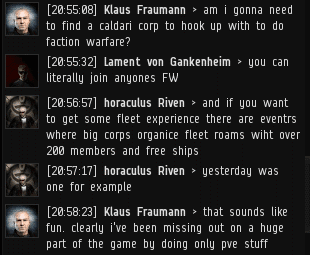 The Agents of the New Order are virtually the only players in highsec who take an interest in helping the newbies rather than exploiting them. 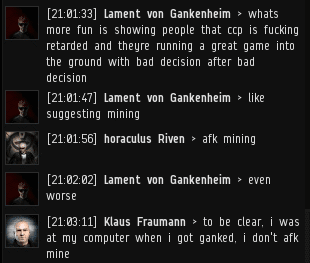 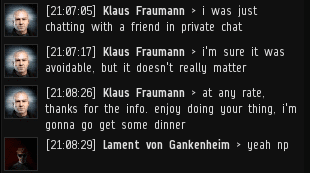 The miner--who hadn't yet been poisoned by anti-Code rhetoric from the carebears--was able to remain calm and attentive. Interesting. Quite a contrast to the miners whose minds have already been horribly damaged by the toxic carebear culture.

The convo concluded amicably. horaculus Riven, a new Agent who was also rolling a CODE. ganker alt at the time, was impressed. A quick debrief session followed: 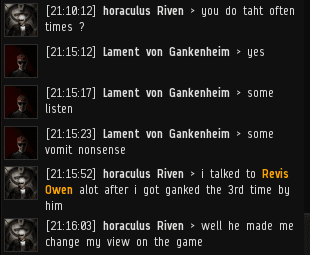 In a competitive PvP sandbox like EVE, the only way to change the game is to change the players. In saving highsec, the New Order is doing just that. To the newbies who have been warned about griefers comes a surprising realization: The people who gank them are their only true friends.
Posted by MinerBumping at 19:39