Calming the Miners of Osmon, Part 1

If joy could be converted into pure sound, it would be the sound of an Agent announcing his arrival in a system of highsec. 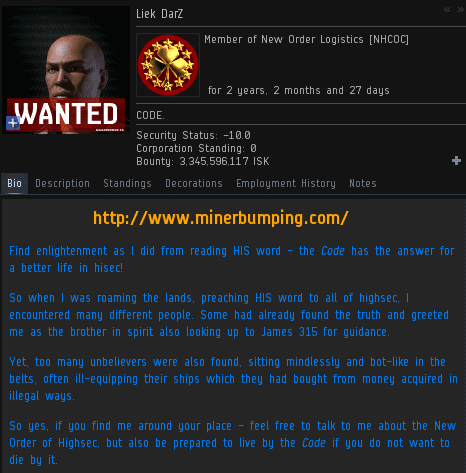 Agent Liek DarZ loves to educate and train highsec miners to obey the Code. He also loves killing the miners; his two loves fit together in perfect harmony.

Liek DarZ's work in the Osmon system quickly bore fruit: Immediately upon announcing himself, he was paid 10 million isk for a permit by one of the local miners. 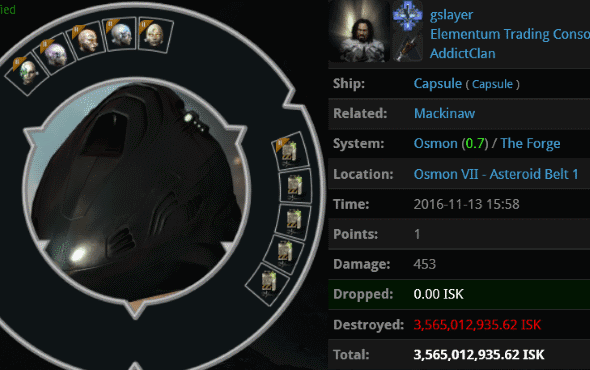 Our Agent's heart was grieved when he discovered that very miner violating the Code only half an hour later. gslayer was caught AFK mining in a 566 million isk ORE-fit Mackinaw. The miner had also been hiding a 3.5 billion isk pod, which earned a spot on the Kills of the Week.

After destroying more than 4 billion isk of gslayer's assets, Liek DarZ hurriedly convo'ed the miner to see what had gone wrong.

It's becoming more common these days for miners to excuse their AFK behavior with claims they'd been distracted by reading the Code. It's not a proper excuse. Reading the Code is important, yes. But even the rebels and Anti-Gankers read the Code. More important is living the Code.

gslayer had tarnished his mining permit forever. Agent Liek offered him the opportunity to purchase a fresh one.

Although our Agents are basically the only friends that the highsec miners have in this game, the New Order's role in the miners' lives goes well beyond friendship. We're basically their parents. Liek gave gslayer a fatherly talk, just like one from an episode of "Full House".

gslayer was down in the dumps--further evidence that he placed too much emphasis on isk and material possessions in EVE. Agent Liek didn't want gslayer to spend his time wallowing in self-pity. It was time to help pull the miner out of the hole he'd dug for himself.

It's extremely vital for miners to accept the blame when they get ganked. If the miner understands that he was at fault, then he knows that he can prevent further harm and improve his life by correcting his own actions. If a miner blames the ganker--whose actions he does not control--then he imagines himself in a terrifying and unpredictable world of chaos. That's no way to live.

Our Agent wiped away gslayer's tears and got him ready for a new day. With that taken care of, Liek DarZ left the private convo and returned to Osmon local chat.

Agent Liek modestly trumpeted his victory in local. But the news was met with some confusion.

The Osmon miners gathered around. They were intensely curious about what had happened. Liek discovered that while the miners were all familiar with the New Order and its Code, they had misconceptions. There was a real danger that they could learn the wrong lesson from the gslayer gank. An Agent's work is never done.