The Angel of Nakugard, Part 2

Previously, on MinerBumping... Nakugard was blessed by the presence of Agent Alt 00, who returned to the system with a bang. When hunter19741 lost a Mackinaw, he found himself tempted to buy a mining permit.

The New Order mining permit, as a product, seems almost too good to be true. The miners began looking for loopholes.

Other Nakugard residents questioned Alt 00. There had to be a catch, right?

The more they investigated the matter, however, the more impressed they were.

Rebel miners grew alarmed. They heckled Alt 00 and tried to discourage their fellow miners from getting Code-compliant. After all, the more permit-owning miners there are, the more our Agents' attention will focus on the few rebels who remain.

hunter19741 was now seriously considering the permit option. He parked his Corax in the ice anomaly and began to read the Code for the first time.

Alt 00 arrived and promptly killed hunter19741's Corax and podded him.

The Code isn't just some dusty old document that our Agents study in their ivory towers. It is a living, working reality.

hunter19741 tried to play space lawyer for a moment, accusing Alt 00 of not following her own Code. It was useless.

Cynicism and skepticism prevailed in Nakugard. ...Or did it?

The fact was, by demonstrating the reality of the Code, Alt 00 had greatly accelerated the miner's process of learning it.

The miner who lost two ships gave Alt 00 a "gf" in local. Obviously that's something he'd picked up from reading the Code. 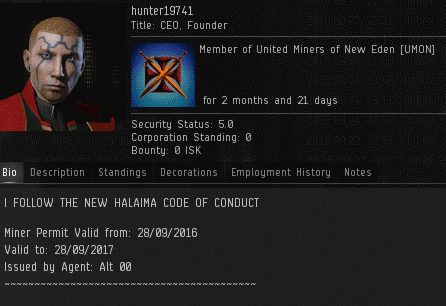 The next day, hunter19741 purchased a mining permit for himself and a few of his alts. He had ambitions beyond being a random Goofus in an ice anomaly. But would his fellow Nakugard miners accept the new hunter19741?