Some people ask, "Why gank the highsec miner?" We do it for Code and content. 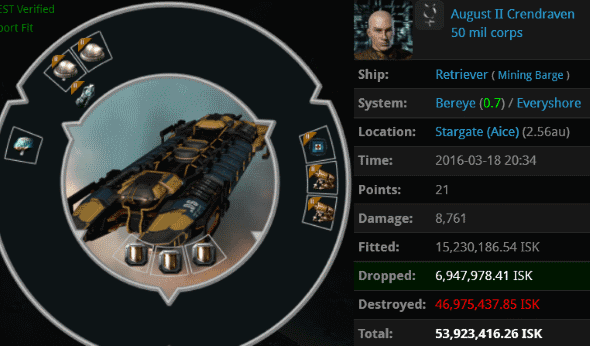 August II Crendraven was piloting a semi-tanked Retriever. He had no mining permit, so he suffered the consequences. The gank was performed exquisitely by Agents Mildron Klinker and Molly Klinker. The Code was enforced; additional content was sure to follow.

Nearly a month later, Mildron was startled to receive an EVEmail from Crendraven. He claimed he'd sent Mildron a payment following the gank, but hadn't gotten a certificate yet. Crendraven offered no explanation as to why he'd waited so long to raise the issue. 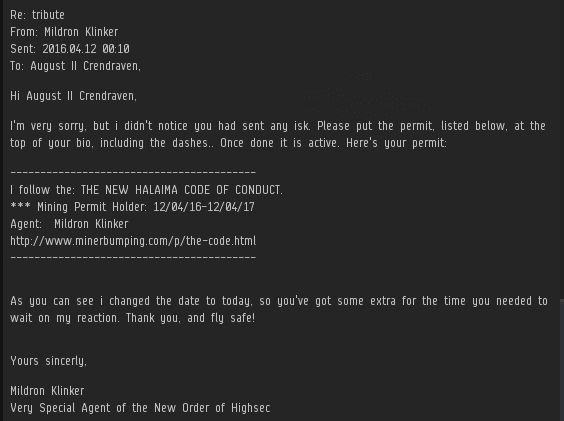 Mildron checked his wallet and, sure enough, he'd gotten 10 million isk from Crendraven shortly after the previous month's gank. Our Agent moved quickly to handle the paperwork.

...But when disaster strikes, our Agents are always the first people the miners call.

Despite the emergency, Mildron kept a cool head. He examined Crendraven's killboard (lossboard) and saw that the miner lost a yield-fit Mackinaw and a 250 million isk pod.

The pod contained a set of "Spur" implants, which I don't think I've seen before. This has nothing to do with the story. I just thought it was interesting.

You cannot mine AFK even with a permit. Next time it will be revoked.

Prior to getting Mildron involved, Crendraven sent a complaint to the Agent who'd ganked him, Brutal Anna. Apparently she didn't give him the answer he was looking for. It's kind of like when a child doesn't get permission from his mom for something, so then he goes and asks dad.

I was not afk ... you need to reimburseme and I had on level 4

Sorry August, I have moved across the system several times today and you failed to greet me in local each time. Plus you failed to warp off your pod. Which both are signs of reckless AFKing.

If you do not agree and insist on you reimbursement I'm obliged to sumbit the case to my supervisor in copy. But I will not pay anything since I sincerely beluieve that you have breached your obligations arising from the Code.

Brutal Anna's contemporaneous notes substantiated her claim that Crendraven was not compliant with the Code. In the face of this overwhelming evidence, it was time for Crendraven to concede and apologize.

Bullshit ... you are covering your useless lying asss. I demand reinbursement plus level four augments... I am a man of my word... given to a worthless child.

Or he could do the other thing.

I was actively mining... I did not do any thing else. I gave you the fee in good faith I will be reimbursed or everyday I will work against your lying organization. How can you lead a dishonorable Corps?
You will have to do better than blaming me with my money in your pocket.

Meanwhile, Crendraven sent another EVEmail to Mildron. He assured our Agent that he was innocent--but he made no mention of Brutal Anna's findings to the contrary.

I am asking for reimbursement and to leave me further alone.

Then Crendraven began sending Mildron a series of EVEmails without bothering to wait for a reply from him.

My insurance paid 64,674,652 plus modues and augs It's impossible that you are unaware of the activities of the scum you fly with. Even in pixels you have no honor?

Since Agent Mildron is the CEO of Brutal Anna's corp--The Conference Elite--Crendraven was particularly upset. He came to believe that Mildron was responsible for everything that had gone wrong.

You are your lying fellow caps will pay for this one way or the other. Liars don't make CEO's. Your a filty honorless lair and so ids CODE.

Crendraven grew more hostile with each unanswered EVEmail. He threatened to get revenge on Mildron and his corp. In virtually every case, such threats go unfulfilled; carebears simply put them on a to-do list where they wither and die. This time was different. August II Crendraven would have his revenge. And he already had a pretty good idea of how to get it.