Highsec miner Nero Mikakka lost a fail-fit Retriever when he was ganked by Agent Ganku Desu. This was clearly a problem for Nero, though for some reason he didn't seem very interested in finding a constructive solution.

Nero wasn't seeking wisdom, but Ganku delivered it to him anyway. It was time for Nero to put an end to his childish ways and focus on getting his paperwork in order.

The miner wasn't ready to become an adult. He sulked and pouted. Nero chose to indulge in a fantasy about being a fearsome PvP'er who could retaliate against our Agent and beat the system.

A stern warning followed: If Nero persisted in this nonsense, things could get even worse for him.

Nero doubled down, repeating a mistake so many of his fellow miners have made while descending a similar downward spiral: He denied being a miner. 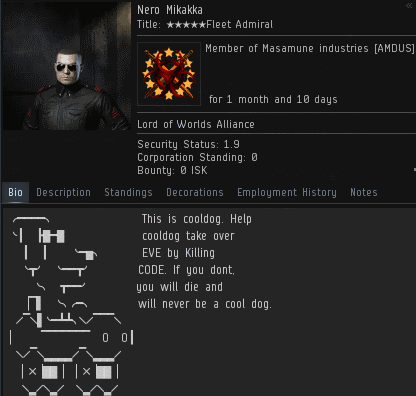 Yet it was clear from his Retriever loss that the self-described "Fleet Admiral" was nothing more than a highsec miner. And he certainly had no clue as to how one goes about becoming a cool dog. Quite the opposite, in fact.

It's uncanny how often people who "don't mine in highsec normally" get caught by our Agents. Miners must be terribly unlucky.

Ganku Desu performed his duty as an Agent, and in doing so brought honour to the Code. By contrast, Nero Mikakka behaved like a Goofus and got his whole corp in trouble.

Nero fully gave himself over to the madness and bot-aspirancy lurking within his corrupted soul. At some point, this miner took a wrong turn in his EVE career. Does anyone sign up for EVE Online with the intention of one day writing an EVEmail like that?

We can all see that people like Nero Mikakka need help to get back on track. And who's going to give them that help--the Anti-Gankers? Don't bet on it. Only the Agents of the New Order are generous and compassionate enough to lend a hand. They're willing, able, and they've already got the proper paperwork filled out.
Posted by MinerBumping at 19:44