Actually, Chrstn's just a spokesman for the one hundred nineteenth edition of the Highsec Miner Grab Bag. Off we go!

Jojzag requested a special meeting with the Saviour of Highsec. But he'd already received an extremely helpful consultation from Agent Snigie Audanie.

The loopy Mackinaw pilot was right about one thing: Agents of the New Order are strong, and bot-aspirant miners are weak. Is it any wonder we're winning the war?

The CODE always wins--always--because we can turn anything negative into something positive. Even the once-hopeless wastelands of highsec.

As you can imagine, Korolator received a wealth of literature in reply to his question. Now to see if any of it sunk in:

The Code bounced off his brain on the first attempt. But our Agents never give up. Every carebear will become Code-compliant. To paraphrase Korolator, it could take a few weeks, months, or years, but it will happen.

Our Agents are always wary of running EVEmails from Russian miners through Google Translate. But sometimes the results are surprising.

"Poschel fuck. You have the developers say that they put on your territory system status 0.6. I am now bitch you'll be there waiting for and regularly drained."

...Most of the time the results aren't surprising, though. Our Agents have good instincts.

Telosis wrote this in local to Agent Basmek Six, who forwarded it by EVEmail. After writing his charming message, Telosis probably sent in a petition to CCP asking for our Agent to be banned. 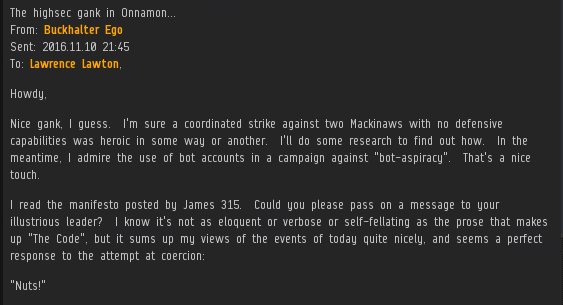 Buckhalter Ego played for time by sending an ambiguous response to Agent Lawrence Lawton's request for a permit payment. Our Agents aren't interested in ambiguity; they seek the truth in all its clarity. 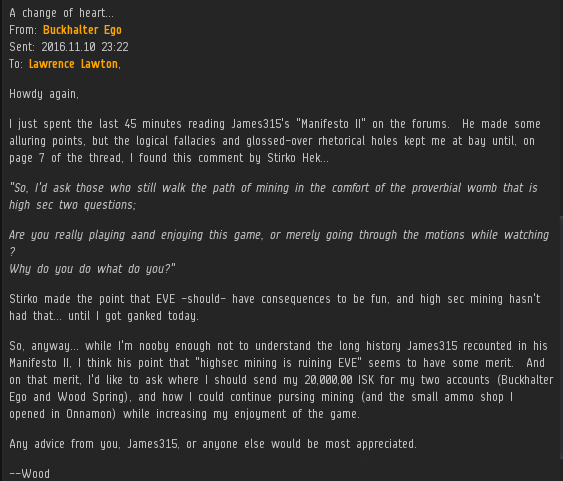 It's safe to say Buckhalter got some really good advice: 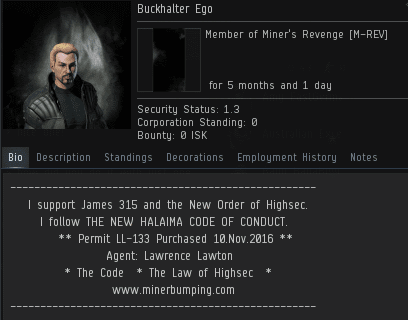 Further proof that the more a miner thinks and reads, the more likely he is to buy a permit.

When a carebear quits EVE, he can be secure in the knowledge that no matter how long he stays away, we'll still be here when he returns. The Code is forever.
Posted by MinerBumping at 18:43