Change Versus More of the Same

Agent Jack Van Impe and some of his friends went bravely into battle against the villainous Morture Degal, who was wreaking havoc in the Ides system. They prevailed, finally putting an end to the tyranny of Morture's fail-fit Retriever. 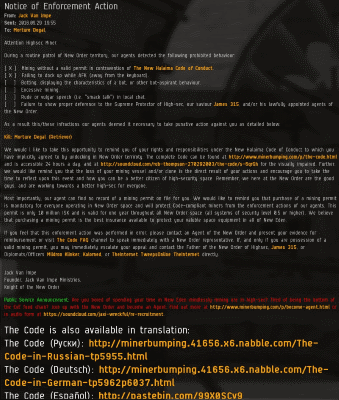 Agent Jack couldn't have been more magnanimous in victory. In a bid to heal and unify highsec, he swiftly reached out to Morture by sending him a fact-filled EVEmail about the Code.

Morture was obstinate in defeat. The miner seemed doomed to repeat his mistakes. 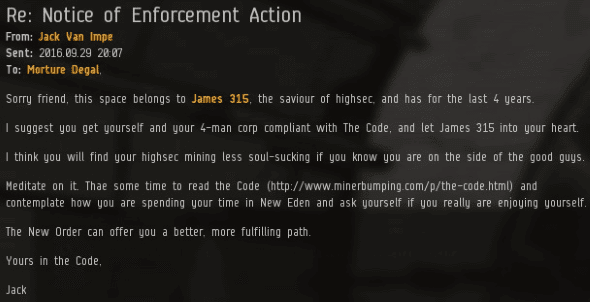 But Jack saw another way forward. He was convinced that if Morture spent some time with the Code, he'd absorb at least some of its lessons. Then Morture could rebuild his EVE career.

Learning from your mistakes is a skill. Our Agents don't make mistakes, but it's a skill carebears desperately need, perhaps more than any other.

"No miner left behind" isn't just a slogan. For the Agents of the New Order, it's a way of life.

I don't know where people get the idea that you can demand to be left alone in a PvP game. Does that really work? Maybe the Imperium would still hold Deklein if they'd told all their enemies to leave them alone and stop harassing them.

Jack tried to reason with the miner, but it was no use. Morture responded with one foul EVEmail after another.

Morture shared his dream of an EVE in which everyone can silently mine AFK without interacting. Yeah, people would throw all their money at CCP to play a game like that.

The miner saw Jack Van Impe as a typical schoolyard bully, the kind you might encounter at the playground while attending a prestigious university.

The next day, Morture renewed his correspondence with Agent Jack. He'd had a lot of time to think things over. Morture realized that the only way to effectively deal with a ganker was to use the word "dishonorable" over and over.

He began addressing Jack as "the dishonorable", which is like nicknaming a giant "Tiny". Jack Van Impe is one of the most honourable men you'll ever meet.

Several days later, Morture was still sending Jack EVEmails. He intended to fight against the New Order, at a time of his own choosing. Like his fellow carebears, the time he chose was never. I suppose that leaves him just enough time to learn from his mistakes.
Posted by MinerBumping at 19:03