The Angel of Nakugard, Part 1

Our Agents patrol all of highsec. It may look smaller than nullsec on the map, but highsec is a pretty big place; our Agents' travels take them far and wide. But sometimes it feels nice to return to a familiar system, one where everybody knows your name.

For Agent Alt 00, Nakugard is one of those systems.

Despite having spent a lot of time with New Order Agents in the past, Nakugard was home to many rebellious miners. 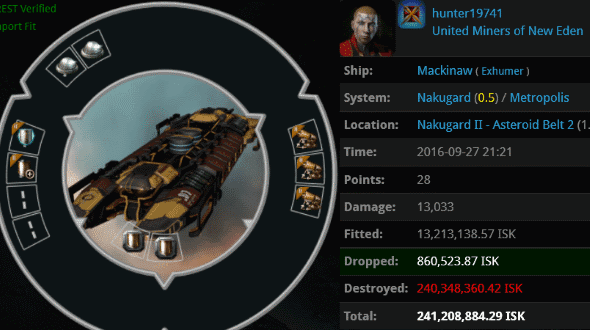 Rebellious miners are mainly good at one thing: losing Mackinaws.

Chastened by his defeat, hunter19741 whined. hunter19741 didn't like becoming the hunted. One imagines he didn't plan on being a highsec miner when he first signed up for EVE and chose his name.

hunter19741 couldn't conceal his curiosity about the famous New Order mining permit. But another rebel miner immediately interrupted and tried to shut things down.

The Anti-Ganking types hate it when miners express an interest in buying a permit. They secretly fear that one day highsec will be completely Code-compliant. And with good reason. 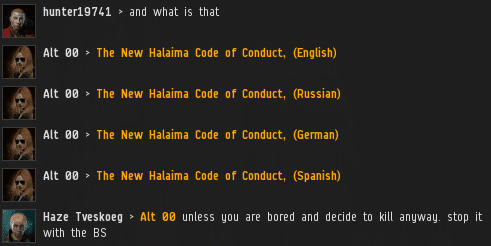 Another cynical miner injected himself into the conversation, urging his fellow carebears not to sell out to "the man".

The rebels don't like to hear it, but many miners find the offer of a permit to be a very tempting one. Fascination and skepticism swirled together in Nakugard.

Of course, a 10 million isk payment is not enough to keep a miner safe. He must obey every provision of the Code, not just the one about buying a permit. Bot-aspirants find the "no AFK mining" provision to be a deal-breaker.

hunter19741 couldn't imagine himself obeying a system that put reasonable limits on his right to urinate while mining. That was the main reason he lived in highsec.

Conspiracy theorists also flourished in Nakugard. Agent Alt 00 saw the anti-Code resistance as a challenge. She was determined to reach these miners and sell them some permits. Could she succeed?

Early indications didn't give her much hope. She would need absolute faith in the power of the Code.